All right, this will be my last leftover turkey dish, I promise! It’s just that I have all the turkey and I love coming up with new ways to use it. Geek, I know, I told you that, right? ;~)

So I avoided the ‘what’s for dinner’ question like the plague tonight. This just isn’t the husband's kind of meal. Couscous, spinach, peppers, these things weren’t even in his vocabulary a few months ago! He finally saw the peppers and said, “oh, stuffed peppers”. Notice the lowercase “oh”. It’s isn’t an excited, OH! More like a disappointing “aw, crap!”

So I placed a pepper on his plate and watched him pick at it for a bit, taking a few bites. Nothing was said until I asked, “What do you think?”

“What? What is that?

He then proceeded to eat the WHOLE THING! Pepper and all! I am still in a state of shock. Apparently, if it has leftover turkey in it, the husband is game. ;~) 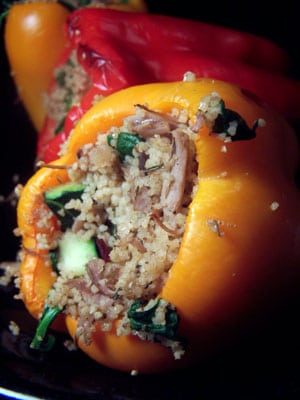 Preheat the oven to 425 degrees

Bring ⅔ of the broth to a boil in a small pot. Remove from heat, add the couscous and set aside.

Cut the tops off the peppers, clean out the seeds and roast for 10 minutes.

Spray a large (and I mean large) skillet with non-stick cooking spray and cook the onion over medium heat for a few minute allowing them to get soft. Add the zucchini, sprinkle with salt and pepper. Continue to cook until zucchini just starts to tender.

Add the turkey and cooked couscous to the skillet. Sprinkle with sage and thyme. Stir allowing the meat to warm up. Add the remaining broth if skillet seems dry.

Add the spinach last, stirring it in until it just starts to wilt.

Remove the peppers from the oven, fill them with the couscous mixture and return to the oven for 5 more minutes.

I served, with a side of Curried Sweet Potato Fries, YUM!