This idea hit me across the face about 45 minutes before dinner. I opened the fridge and saw peppers. Before I knew it I had a package of sausage in the microwave defrosting!

The husband said it was… you guessed it…  “good”. HOWEVER, he asked for seconds AND he said he would like me to make it again! So that’s a good sign. :~P Even the toddler gobbled up a whole skewer! 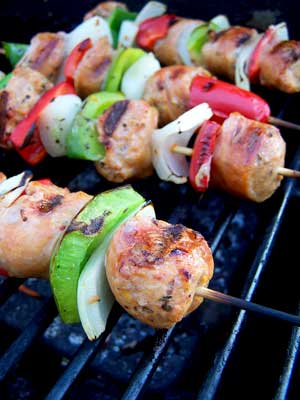 Put the olive oil, vinegar and Italian seasoning in a large bowl. Add the pepper and onion chunks. Toss in the oil mixture to coat.

Cut each sausage links into 4-5 chunks. If you keep the sausage slightly frozen this process is much easier. Simple defrost frozen sausage for a few minutes in the microwave.

Toss the sausage chunks into with the pepper and onions

Skewer the sausage with the pepper and onion, alternating the three ingredients. I shot for 4 pieces of sausage per skewer.

Makes 8 skewers and I had enough veggies left over for a veggie one.

Lower the grill to medium cook for 20-25 minutes turning frequently.

I served on a bed of instant whole grain flavored rice. 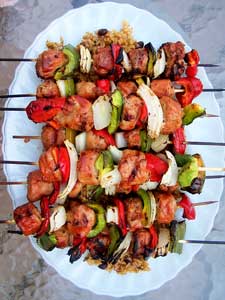 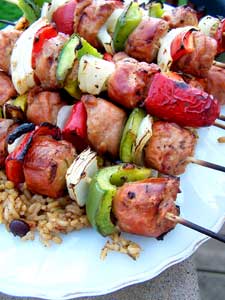