I had no intentions of cooking last night. The husband was pissing me off. I had a long day at work. I have a messy house. A to-do list about as long as the yellow pages and I knew I was going to have to go to bed early just to wake up and start the cycle all over again.

Sometimes I just get into these blah funky moods. So instead of throwing myself a pity party I decided to lock myself in the kitchen. Well... there's no lock but you get my point. 🙂 I find cooking just an outlet for me anymore. I'm happiest in the kitchen. I really am.

Anyway... since it was only me and little guy for dinner I decided to do something with the Red Quinoa I bought at the Trader Joe's the other day. I've never seen it before. If you are new to Quinoa check out my old Food Find about it. It's new for me as well. 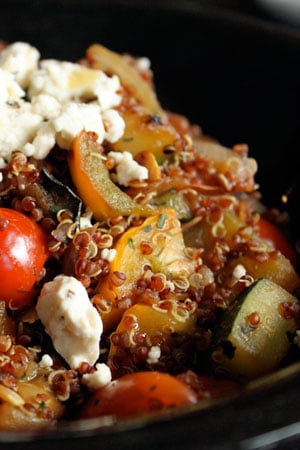 Last night I mixed it with some skillet veggies, topped it with feta and bit of green tabasco.. oh.my.word! TASTY! and so so simple! Little guy wasn't impressed, he's a bit intimidated my Quinoa but I'm working on him! 😉

Bring the Quinoa and 1 cup of water to a boil over high heat. Once boiling, cover, reduce to a simmer and LEAVE IT ALONE for at least 15 minutes. I have a hard time with this leave it alone thing, can you tell?

While the Quinoa is being left alone 😉 we're going to make the skillet veggies exactly like we did for the Skillet Veggie and Feta Tacos.

Heat a small non-stick skillet over medium high heat. Spray with non-stick cooking spray. Add the onion and cook for at least 2 minute so that the onion just starts to burn.

Toss the onion around a bit and then add the remaining veggies.

Sprinkle with a bit of Kosher salt and pepper. Toss to coat everything and then cover. Don’t touch it for 2 minutes.

After 2 minutes uncover, add the cumin and cilantro. Toss to coat everything and cover again for 2 more minutes. 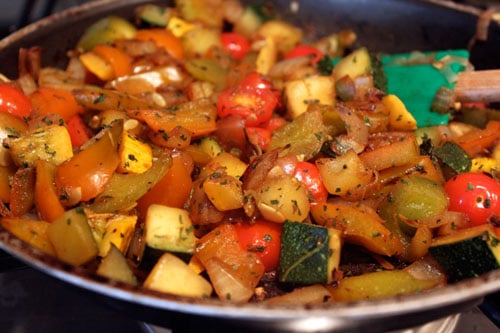 By this time your Quinoa should be about ready. It should look like this... 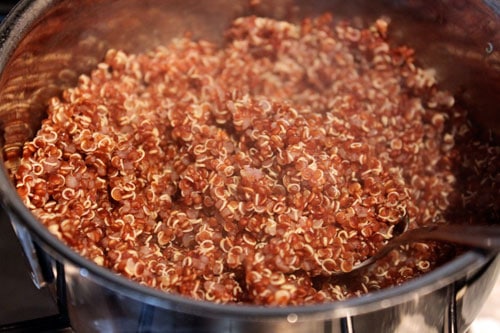 Shut off both burners and mix the cooked Quinoa with the veggies. Split into two equal portions around 2 cups each. Top each with ½ oz of feta and a dash or two of Tabasco, if you like. 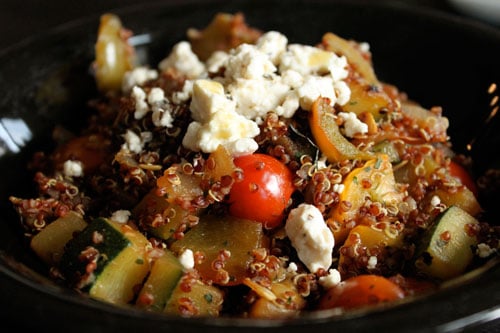 YUM! I just ate my leftover portion for lunch. It's wonderful at room temperature!

FULL DISCLOSURE: I have partnered with ATHENOS Feta to serve as one of ATHENOS Change for the Feta Bloggers. I am compensated for my time commitment to the program, which includes blogging about my cooking experiences with ATHENOS Feta. I have also been compensated for the food purchased for my Change for the Feta creations. However, my opinions are entirely my own and I have not been paid to publish positive comments. Click here to see all my Feta Ideas!!