Have you ever eaten at a Noodles & Company? One recently opened in my area and I LOVE it! I really like this trend of fast food that’s NOT burgers or fried chicken.

Anyway, they have a Thai Curry Soup that is my absolute favorite! I don’t normally eat Thai. Wait…. that’s a total understatement. I never even knew Thai food existed until about 3 years ago when some new friends took me to a Thai/Indian restaurant. Long story short Thai inspired flavors are new to me and the Thai Curry Soup at Noodles & Company really sparked my interest. It seemed to have such complex flavor and depth. I never ate anything like it before.

So this is my homemade version inspired by the Noodles and Company’s Tai Curry soup. It’s not exactly the same but boy did it come out better then I expected on the first try. The husband even liked it but you should have seen his face when I told him Coconut milk was in the broth. It was priceless! 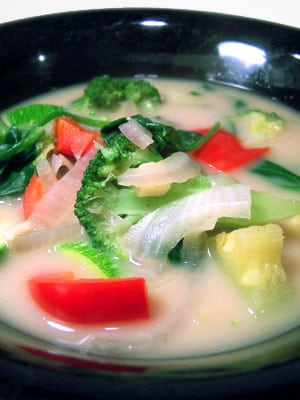 Add the onion and garlic to a large pot sprayed with non-stick cooking spray over medium heat. Let the onion sweat and stir occasionally while preparing the spices.

Crush the coriander seeds with a large knife. It’s may sound funny but put them on a cutting board and chop at them for a few minutes like you would garlic. This will release their flavor. Be careful they may fly off the Board. Add then to the onion along with the curry, ginger, and cumin. Stir coating the onion with the spices.

Add the broth and coconut milk. Raise heat to medium high and bring to a boil.

While waiting for the broth to boil. Prepare the veggies. I kept the pieces fairly large so they wouldn’t overcook. Once the broth is boiling add all the veggies, except the spinach, and lower the heat to back down to medium. Cook for about 5 minutes until veggies begin to become tender.

Once the veggies are just about done, add the spinach. It will cook almost immediately. Just stir it in and wait about a minute.

Lower to a simmer and serve!

I, of course, froze some single servings for lunch. You will not want to keep the soup on the heat for very long, the veggies will begin to overcook. Now… just look at the nutritional information, you really can’t beat that! And it’s SO tasty!