I'm happy to announce this shall be my last phone-photographed post! I splurged and got a new camera! 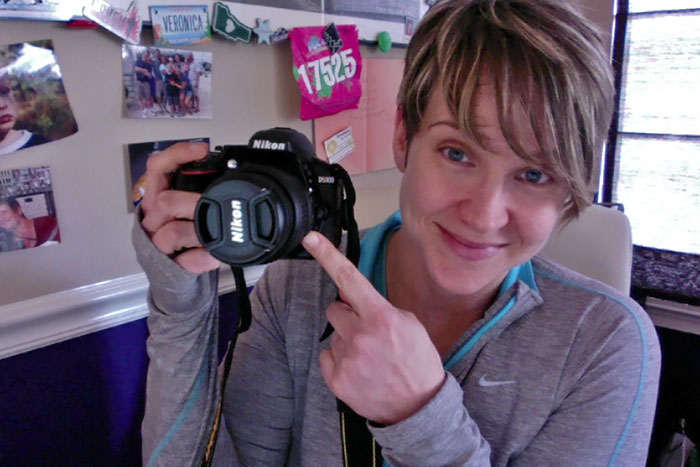 It's a Nikon D5300 and I LOVE it. I had a Canon before so I'm still learning the controls. I do miss the set-up of my Canon Rebel but this baby has WiFi and it's really awesome. I'm going to take the leap and get a macro lens for it so I can take better close-ups. I said that when I bought my first dSLR but this time I really mean it.

Anyway, on to this salad!

I totally used Evan's 4th birthday party as a reason to experiment with this idea. Normally I just cook for myself (and The Boys of course, but they're BORING) Because I'm a little self-conscious of the dishes I make.  I know not everyone's into things like kale and beets. Most folks don't appreciate a bean brownie or cookies made with less-sugar. That's really why I like blogging so much. It gives me an outlet to explore all the things I like about food and cooking without disappointing anyone. It's hard to sometimes share my ideas here; it's even harder to serve them to someone. Well, maybe harder isn't the right word. Scary. It's scary!

So I decided to take the leap and serve this salad along "normal" and expected food like a cold cut platter and Sloppy Joes (which I also doctor up but no one seems to mind.)

Well, it seemed to go over pretty well! I'm sure not everyone liked it but my friends did. I saw seconds being scooped and everything! Plus these friends aren't your normal, say-nice-things-to-keep-the-peace friends. They are they honest, honey-you-really-shouldn't-wear-those-shoes-with-that-outfit kind of friends. Everyone needs at least one of those friends and I'm lucky in that department, I have quite a few. 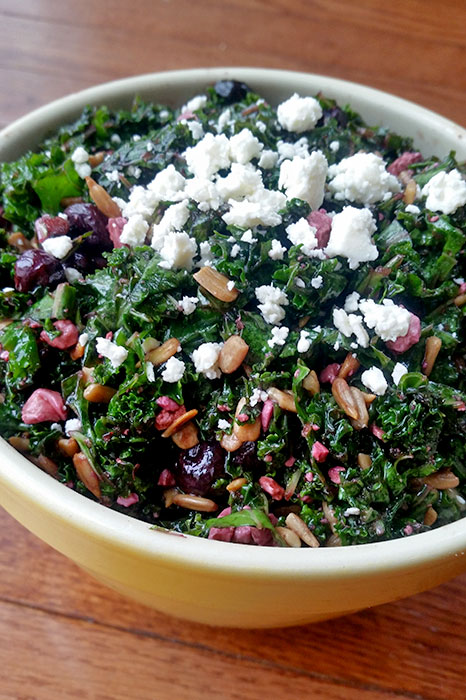 Anyway, let me share what I did. (I used all the kale I had for this recipe but there was enough dressing for more if you have it.)

In a small pot add the blueberries, vinegar, oil, honey, salt, and oregano. Whisk and warm over low heat until everything incorporates. The frozen berries tend to seize up the honey.

In a large zip-lock bag add the kale and feta. Pour the dressing in. Seal the bag and massage.

Place the bag in the fridge until ready to serve. I let mine sit overnight but an hour or two will be fine. The vinegar will break down the kale. Someone at the party actually thought it was cooked!

When ready to serve, drain the dressing from the bag, add the sunflower seeds and toss to incorporate them throughout the salad.

Transfer the salad to a bowl and top with a bit more feta to make it pretty. 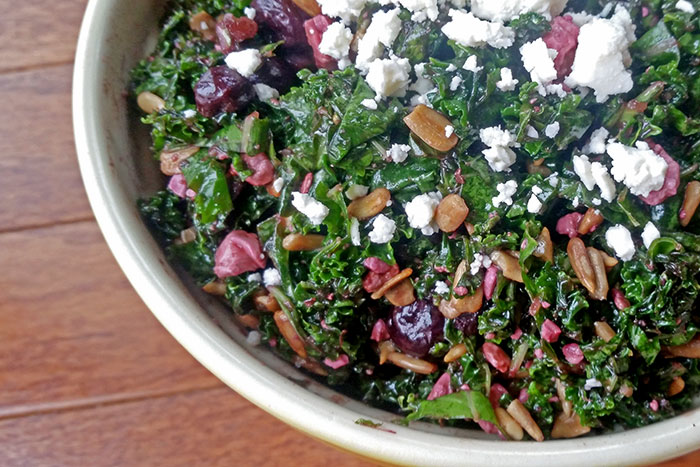 Dishes like this are hard to provide nutritional information for because you toss out most of the dressing once everything marinates, and at parties people's serving sizes vary. The whole batch, if you actually consumed all the dressing which you wouldn't never do -- is 1,700 calories. Most people took about a half-cup serving as a side.

Hey, it's a party dish. If your biggest problem is having to estimate the awesome kale salad you just ate, I think you're doing all right. 😉

Now... I can't wait to cook something just so I can photograph it!!