This is a semi-homemade style Sloppy Joe recipe I whipped up for small party I was having today. I wasn't in the mood to do a complete from scratch but I can't possibly serve a meal without veggies (it's just not in my blood 😉 so this was a quick compromise.

To my surprise... it was a complete hit! Everyone like it and I got tons of compliments. I guess people could have just been being polite but I think these pictures say it all... 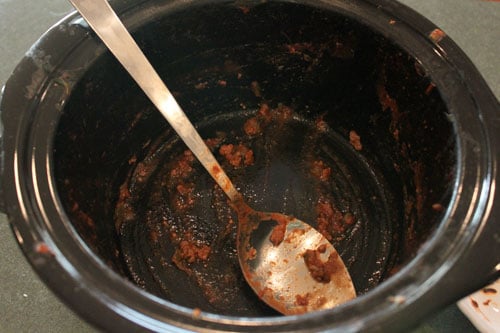 I love when this happens. It makes me feel good to feed good healthy food to people. Sure I could have bought fatty ground beef and simply mixed it according to the manwich package but that's no fun. Why not veg it out? It stretches the meat, adds vitamins and volume while making it lighter and more flavorful. It's a win-win in my book! 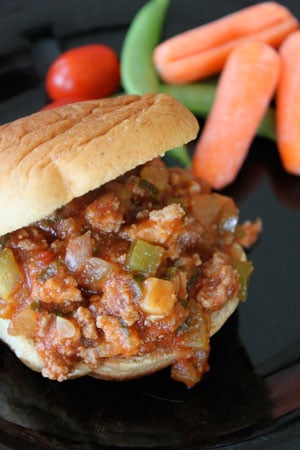 Brown the meats with the onion and all the veggies. I started with the meats and onion in a large stock pot and then cut the veggies in order adding them and stirring them in the pot.

Transfer the browned meat and veggies to my slow cooker, add the manwich, tomatoes, and paste. Cook on High for at least an hour and then lower to low for the party.

You could add the manwich, tomatoes and paste directly in the stock pot and heat through. Then just keep it on simmer until ready to serve.

I served with a variety of rolls. Some people were even eating it straight up!

I'm not going to do Nutritional Info because honestly I have no idea how many servings it is. I fed about 13 people but everyone took varying amounts. For my fellow Weight Watcher friends I'd count a half of cup as 2 points but that's just based on "Roni Math" it's not scientific at all.