I can't believe I pulled it off!! A few weeks ago I saw this awesome post on Noble Pig with a recipe for Pasta Pie and I knew immediately had to make it. Of course I couldn't leave it alone, I HAD to give it my own spin. What can I say? it's a disease. 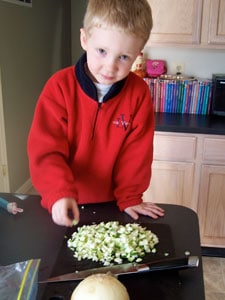 As for the family, they LOVED IT and so did I! The toddler was completely interested in the entire process. Here he is stealing piece of zucchini from the cutting board. Look at that expression, I love it!

When we sat down to eat he was at first, a little intimidated by the pie piece but once I showed him how to eat he went to the town. Even the husband had nothing but good things to say. I was shocked! Although he thinks it would be better with my sauce. Ok, how can I argue with that? 🙂

My strategy was simple... reduce, replace and add some veggies. It's what I always do! 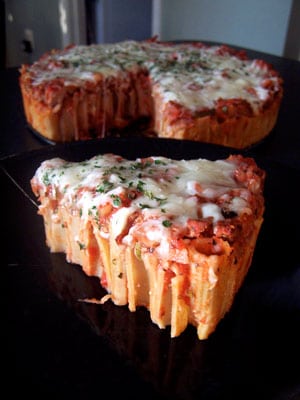 Bring a large pot of water to boil and cook the pasta until just done. Shave off 1-2 minutes from the time given on the box. I cooked mine for 10.

While preparing the pasta you'll be making the sauce. Heat the oil in a large skillet over medium-high heat. Brown the turkey with the olive oil, onion and garlic. Add the zucchini and sprinkle with a bit of salt and pepper. 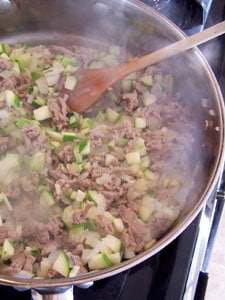 By this time your pasta should be ready. Drain, rinse with cold water and put back in the pot. Add ¼ cup of the crushed tomatoes and stir to coat the pasta. Set aside.

Add the remaining crushed tomatoes to the skillet. Stir and add the tsp of basil. It should boil fairly quickly. Lower to a simmer.

Returning to the pasta, add the ½ of Parmesan cheese and stir to coat. 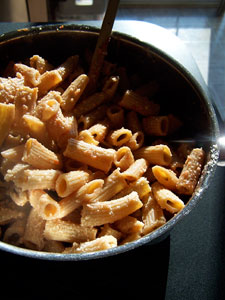 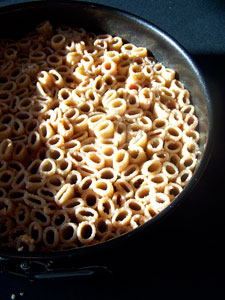 Spray a 9-inch springform pan with non-stick cooking spray. Begin to place the pasta upright in the pan. It will be a little touch and go for a bit but you'll get the hang of it. I started with the perimeter and worked my way to the center. It took me about 10 minutes. Don't worry some will be taller and shorter. Some will even have a bend. It will all work out once you are finished.

Top the pasta with the meat sauce. Now, I do NOT have patience to make sure there is meat and sauce in every tube. I just banged the pan a few time allowing things to setting and then added some more sauce until all but about a cup or so was on left in the skillet. 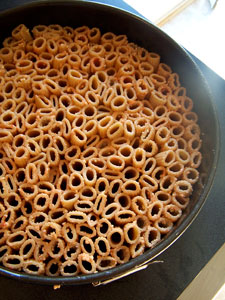 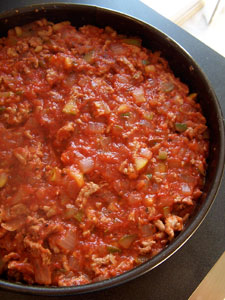 Bake in the preheated 400 degree oven for 15 minutes. Remove and top with the mozzarella. Sprinkle a bit of parsley on top. Return to the oven for 10 more minutes. 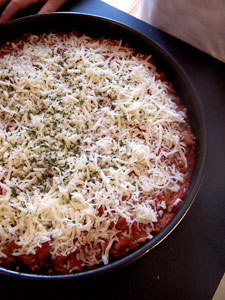 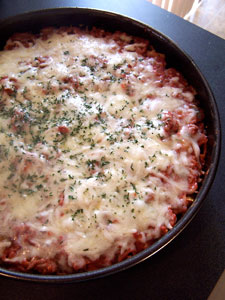 Remove and let sit for at least 5 minutes. Run a butter knife around the edge. Release the spring form and viola!

Add a splash of water to the remaining sauce in the skillet to serve on the side in case anyone wants a little extra. 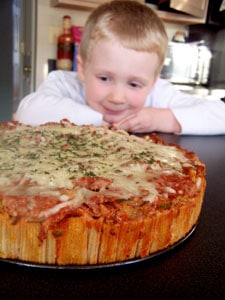 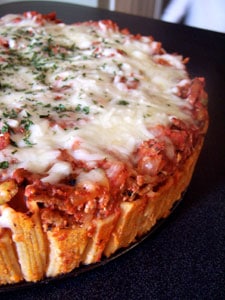 Now, for the nutritional information. I reduced the amount of pasta, cheese and meat from the original recipe, yet used the same size pan. Using the ingredients originally posted on Noble Pig and using the same number or portions for each recipe (6), I reduced everything but fiber, that I increased. 🙂 Here is a little side by side from Nutrition Data. Remember these are just estimates. 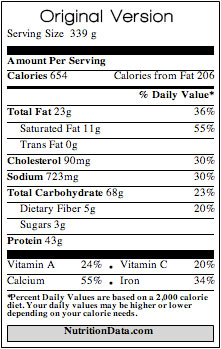 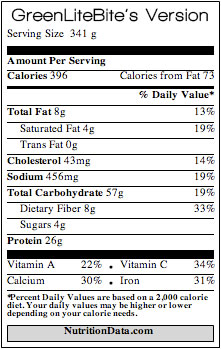