When you join a CSA and have a few lazy days in the kitchen you end up being overwhelmed with vegetables. My fridge is busting at the seams with fresh produce and I needed to find a tasty a way to use some up. The first thing that came to mind..... SOUP!

What's better then a big bowl of vegetable soup? Especially as the nights are getting cooler and the fall weather is moving in. It's perfect soup season. 🙂

Anyway... I decided to use the leeks and kale that I got in this weeks share as the inspiration for the soup. I have to be honest, this is my first time using leeks. They just aren't something I gravitate towards in the produce aisle. I'm not sure why I was intimidated. They were super easy to use and added a different dimension to the soup. More mild than an onion yet very tasty. I hope to experiment more with them in the future.

As for the family and this one. Well, the husband wasn't around when I made it but he's not a big soup fan anyway. If it isn't Chicken Noodle he generally doesn't want anything to do with it. However the little guy DID try it. Proof...

Aaaaand.... He LIKED IT! Until he hit a piece of celery. He then declared his hatred of celery and refused to finish the bowl.

Ahhhh kids. Gotta love them. 😉 In his defense celery is the ONLY vegetable he has consistently NOT liked since about the age of 2.

Here's how I made my new favorite soup. 🙂

Heat the oil in a large stock post over medium heat. Add the leeks and garlic. Sauté until just soft. Add the celery, carrots, and green beans, Stir to combine everything. Add the white beans and rosemary. Stir and continue to cook for a few minutes.

Add the broth and raise the temp to high to bring to just boiling. Cover and lower to a simmer for about 30 minute until the carrots soften. Stir in the chopped kale and cook for just a minute or two to soften or longer if desired. I like mine to still have some bite. 🙂 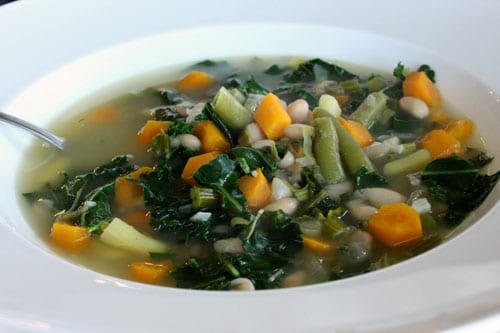 I'm estimating the final soup to be about 14 cups but who only has a cup of soup at home? I know I don't. I want a big ol' bowl! So I'm doing the nutritional info based on 7 - 2 cup servings. I wouldn't be surprised if you even got more but I'd rather be conservative with the nutritional information. As for WWP I'd probably round down to 2 as the soup is mostly veggies but the nutritional info has it coming out to 3 point for 2 cups. Use your best judgment.