Did I tell ya? Yours truly is cooking Thanksgiving dinner this year. Yup... first time. I have always helped mom but never have I hosted the family here at home for the big day. This will be a first!

The head count may be up to 13, THIRTEEN! I don't think I even have 13 chairs! But that's the least of my worries. Turkey day is a big deal. You got the bird, the potatoes, and most importantly the stuffing! It's like the cooks signature on the Big Day. Right?

So I couldn't wait until the big day to try a new stuffing recipe. I had to take at least one dry run. So I defrosted a small chicken and called Mom. :~)

See... mom makes a mean stuffing. She doesn't have a recipe, every year it's a little different but every year it's good! (well, except the year she slipped on the pepper :~)

So this was a stab at Mom's technique, with a GreenLiteBite makeover, of course. :~P I plan on doubling this recipe for my "Big Day".

Oh! and the husband liked it! He wasn't as excited as I would have liked but, whatever. I thought it was AWESOME! The toddler, not so much. He tried but was turned off by the look of it. As you can tell, it's hard to photograph a big bowl of stuffing and make it look appetizing! Or at least as good as it tastes! :~) 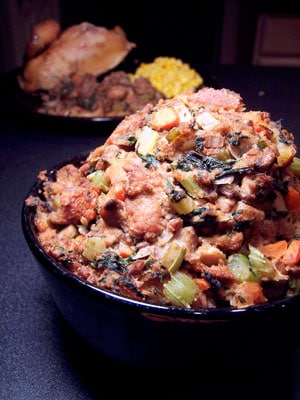 Preheat the oven to 350 degrees

Lay the bread slices on a cookie sheet and back for ½ hour flipping once until crunchy all the way trough.

Heat the oil in a large skillet over medium heat. Add the onion and carrots. Cook for a minute or two before adding the celery and mushroom. Stir and keep on heat while you prepare the sausage.

Lightly cut the sausage lengthwise by piercing the casing (skin). Remove and add the sausage meat to the skillet. Cook while breaking apart with a wooden spoon. As it browns it will get easier.

Start adding your spices while the sausage is browning.

Once the sausage is broken up, add the baby spinach. Stir in and it will cook down.

Now you may have some good bits sticking to the bottom of the skillet. That OK, good even! Add about half of the chicken broth, stir and all the goodness will come up. :~)

At this point the bread is probably done. Remove from the oven and cut into cubes. Add the cubed bread to the skillet with the remaining broth. You may want to add the broth a bit at a time, so you don't make it too moist. If it's not moist enough, add a splash of water.

Shut off the heat and let it sit a minute. Enjoy now or stuff in the cavity of a chicken or turkey. Put any leftovers in a bowl and keep warm in the oven.

I didn't official weigh the serving sizes but I was able to estimate about 4-5 cups of finished stuffing. So I'm going with 6 servings of just over ½ cup each and that's a conservative estimate. There was a lot of stuffing there! Worse case scenario, you can separate into 6 equal portions for more accurate nutrition information.