Cooking whole chickens did not come natural to me. Quite frankly, they intimidate me and sometimes still do.

However, from an economical standpoint they are normally always your best bet. Usually whole chickens are much cheaper per pound and you can make stock/soup out of the bones. I can easily get meat or broth for a few meals out of one bird.  Plus, chicken cooked on the bone really is that much better.

Not to mention, whole-bird cooking makes you feel like a total bada$$ in the kitchen.

A few weeks ago I spatchcocked my first-ever chicken and cooked it on the grill. 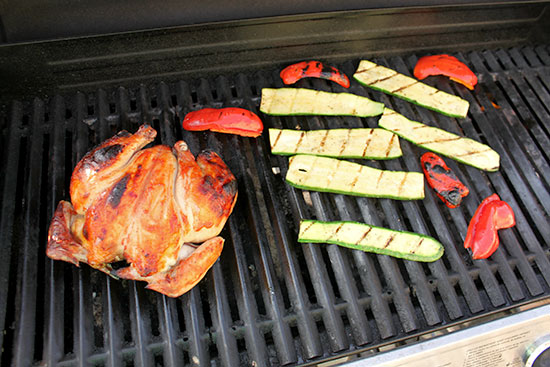 Basically spatchcocking (aka butterflying aka spattlecocking) means to remove the backbone from the chicken so you can cook it flat. This not only reduces cooking time but makes a lot more of the skin nice and crisp. I'm sorry but chicken skin is one of my all-time favorite indulgences. If I had to pick between cake or crispy chicken skin I'd pick the chicken skin every time.

Anyway, it turned out great and was much easer than the beer-can chicken method.

This past Monday night I decided to do it again but in the oven and surrounded with sweet potatoes. 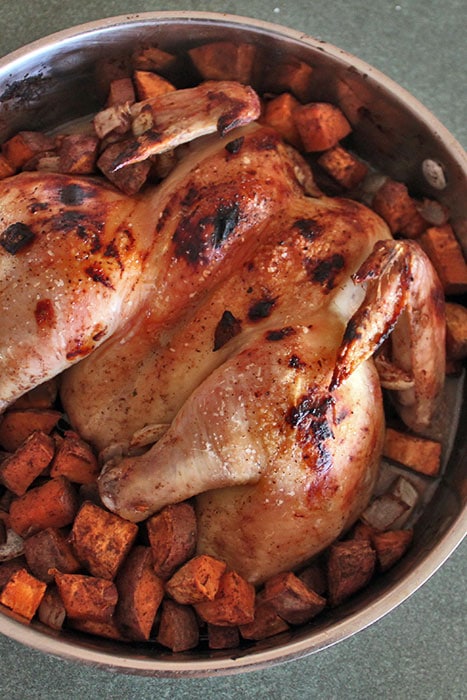 The result was FAN-FREAKIN-TASTIC! The whole family loved it! (The chicken at least.) Both my kids are hit or miss with sweet potatoes for some reason but The Husband, who doesn't really like them, actually enjoyed a serving prepared this way. I was shocked!  Each kid had a few bites of the potatoes but preferred the chicken and veggies.

I'm going to document exactly what I did in hopes it inspires you to take the leap to a whole bird (if you don't already).

Here's what you need:

Preheat the oven to 500 degrees.

To spatchcock the chicken you first have to remove the backbone. This is not as hard as it sounds but you need a good pair of kitchen shears. A knife would be much more complicated, I think.

With the chicken breast side down, cut along one side of the backbone. 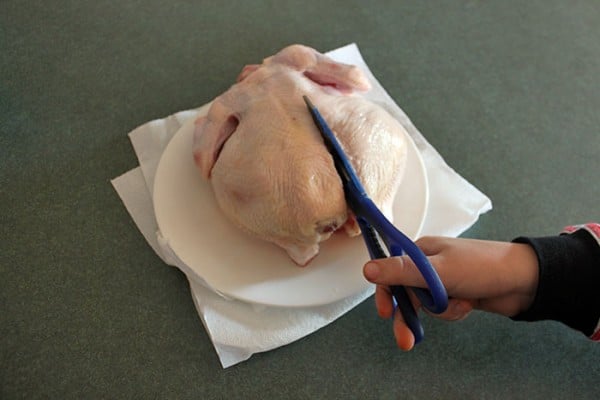 Notice the 9-Year-Old's hand. He saw me struggling to take a photo and hold the scissors at the same time.

Once you cut through, repeat on the side. 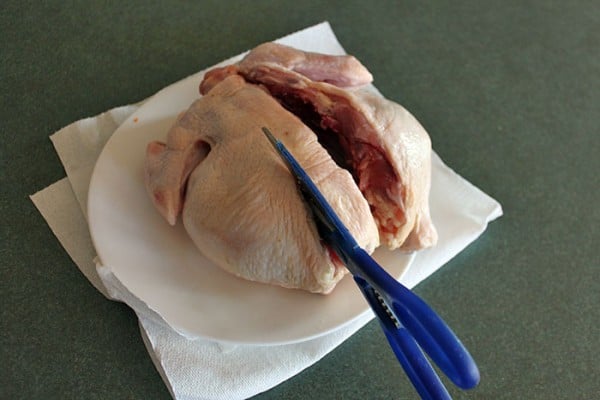 I lost the 9-Year-Old. He was too grossed out to cut. lol

That's it. The hardest part is done. Breast bone is removed. 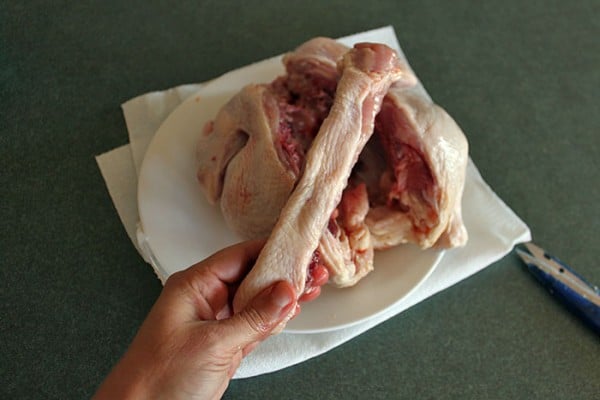 DO NOT THROW IT AWAY! We're saving that baby for some stock!

Place the breast side down in your baking dish of choice and press to flatten. The only thing I had that was big enough was a large, heavy skillet. 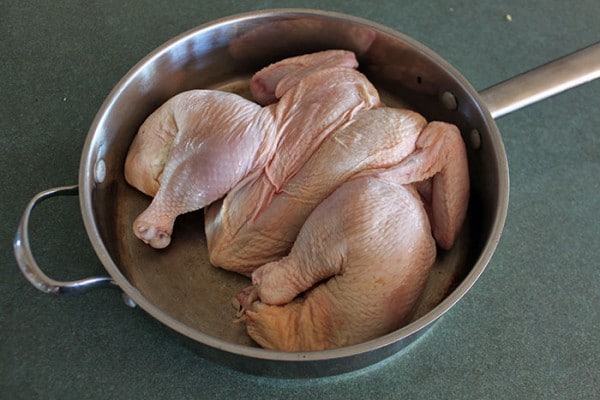 Other choices include: Cast iron skillet -- I don't own one, a large casserole dish or even a baking sheet with sides to hold in the drippings.

Sprinkle the chicken with salt and pepper and set aside while you prepare the rest of the ingredients. 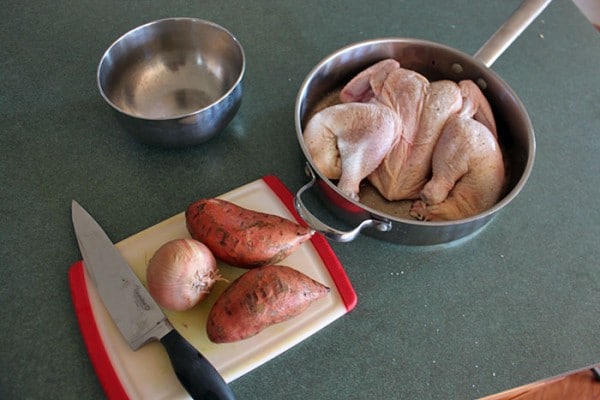 Scrub the potatoes if you plan on keeping the skin on. You can peel them if you like I'm just a fan of skins in general.

Cut the sweet potato and onion in chunks about an inch thick. I'm not very particular here. I just chunk them. Place the sweet potatoes, onion, maple syrup, ginger, cinnamon and allspice in a bowl and toss everything together until the spices coat everything. 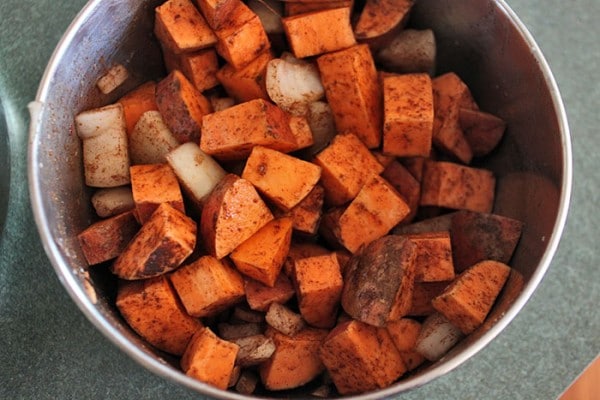 Arrange the sweet potatoes around the chicken. My pan was a tiny bit overcrowded but it's all good. 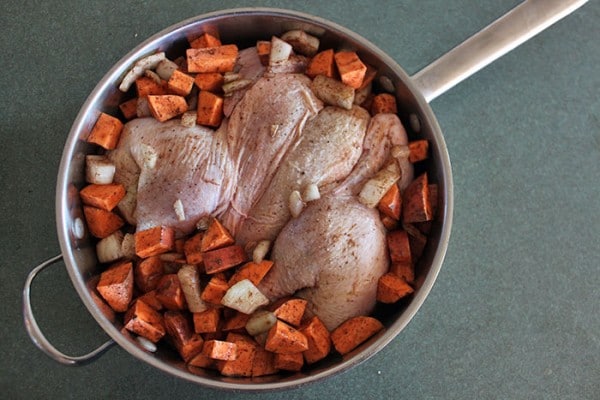 Place the chicken in the preheated 500-degree oven and set your timer for 15 minutes.  DON'T OPEN!

After 15 minutes remove and toss the potatoes. Not much change... 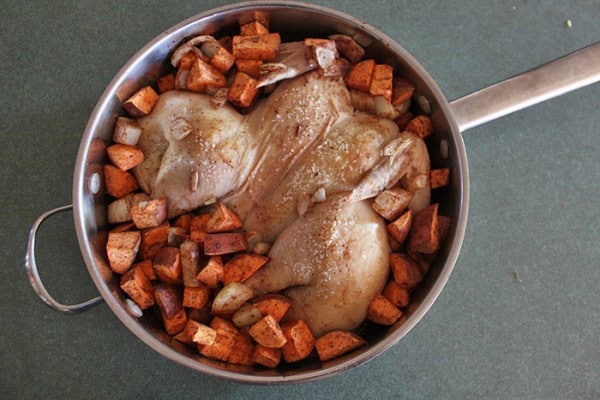 Place back in the oven and reset your timer for 15 minutes and again, DON'T OPEN! Let the smell fill your house and put a smile on your face.

Once your timer goes off remove again and toss the potatoes again -- they should start getting softer at this point. 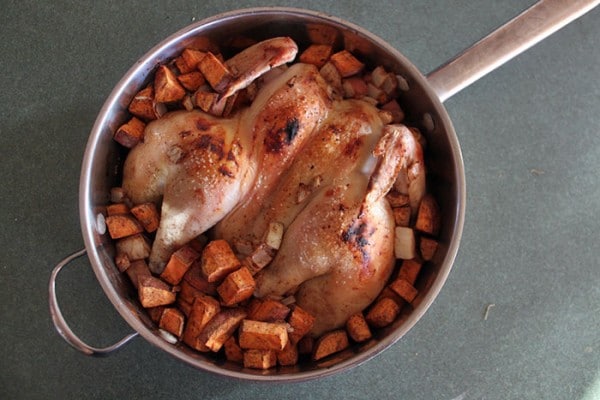 If your bird is closer to 3 pounds you may want to check the internal temperature and see where it is. A 3-pound chicken should only take about 30 minutes. Mine was 4.5 so I placed it back in for another 15 minutes. Again, set your timer and leave the darn oven alone!

Remove and check the temp. 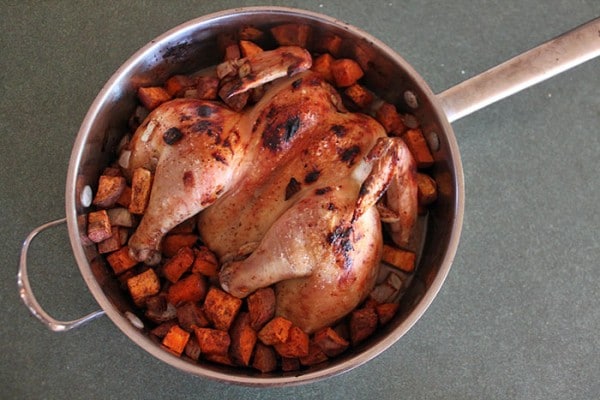 The juices should run clear when pierced between breast and the temperature should be 165 degrees in the thickest part of a thigh. Mine was perfect at 45 minutes and I only opened the oven 3 times!

See, you thought cooking a whole chicken was hard -- well, at least I used to!

Let the chicken rest in the pan at least 5 minutes. Serve in pieces or cut the meat off the bone. Frankly, we just hack at it. The Husband gets a breast and wing and the kids and I take pieces of the meat from a thigh and the other breast. It's a mess, which is why you'll see no further photos.

In addition to the sweet potatoes I also served it with some leftover roasted broccoli. It was a great family meal!

After dinner I pulled all the extra meat I could off the bones and stored in a Tupperware container for lunches. I've been adding it to my Roasted Eggplant & Tomato Soup all week for a protein boost.

With most of the easily accessible meat removed, I placed all the bones plus that backbone we removed earlier in a pot and covered it with water to make stock. I do this part different every time depending on what I have hand. This time I added an onion cut in half, dried thyme, dried rosemary, turmeric, a few whole cloves, whole peppercorns, and 2 tsp of kosher salt. 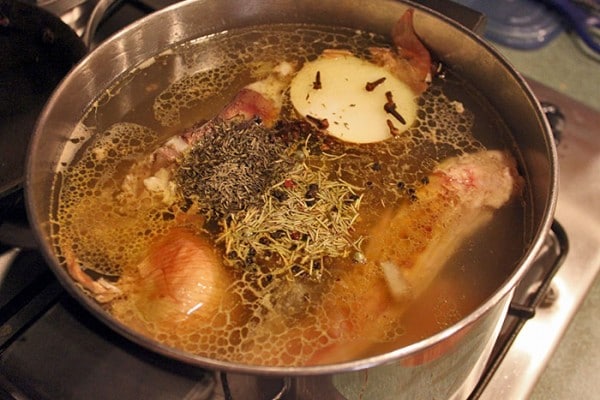 I bring everything to a boil, then lower to a simmer and cover. It then cooks all night. The next morning I shut off the heat, let it cool a bit and strain. I then pick through and get even MORE chicken pieces, which I make into a salad or add to the soup I'll make.

Right now the strained broth is in my fridge begging to be used. I'm thinking of making this (a fav of mine as fall sets in) with it on Thursday for a quick dinner with it.

That one little bird was totally worth the effort.

Nutritional info is going to vary based on so many factors so I don't feel comfortable sharing points and such. If you are counting, just weigh the chicken by the ounce and then estimate the sweet potatoes based on generically roasted sweet potatoes.

Hope that helps! Let me know if you never spatchcocked. This method is totally new to me but I love it!