It was one of those days I didn’t want to worry about dinner. So before work I pulled out the Crock Pot and a pound of chicken breast from the freezer. Genius! Right? Who ever came up with the crock pot idea should be named inventor of the century. It’s a life savior!

So this idea is simple, a can of creamed corn, a can of diced tomatoes, a can of beans and some chicken. Spice it up anyway you like and add the quinoa at the end to soak up the liquid!

You should have seen the husbands face when I put the bowl in front of him. I tried not to say anything and wait for his reaction (he’s never seen, heard of or would ever want to try quinoa). He was quiet and after about 1 minute I said, “don’t worry I left the chicken in big pieces so you can find it easily.”

He just laughed and said “What is it?”

I went on to explain what quinoa is and he continued to pick out all the chicken pieces. He said he liked it but left most of the quinoa and beans in the bowl. Hey… at least he tried it! The toddler picked at it too but ate a few good bites. 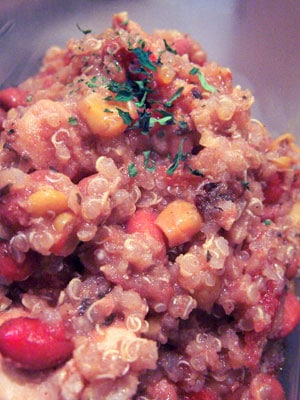 To be honest, the picture doesn’t do it justice, it was really good. Especially if you are a one bowl meal lover like me.

Put all ingredients except quinoa in a crock pot on low and cook for about 6 hours.

A half an hour before dinner, add the quinoa. It will soak up the remaining liquid.

Here’s a picture before and after cooking. I’m sorry they aren’t the greatest, it was a really hard dish to photograph! 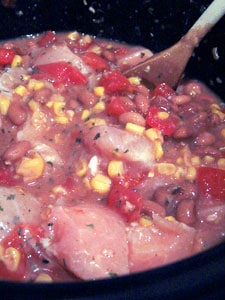 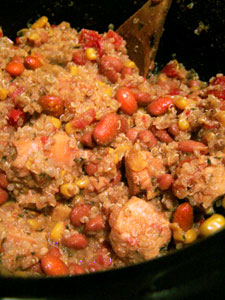 I got 5, 1 cup servings and boy was it filling!