Cooking large cuts of meat isn't something that came natural to me. Whole chickens, large roasts, even pork loins I used to find intimidating. I'm not sure why -- in some ways they are easier to prepare than individual steaks or chops. Preheat the oven, pop them in, set a timer and boom! Dinner.

They do require a bit more planning. You can't just pull out a frozen brisket after work and have dinner on the table in an hour, which is why I think I've stayed away from such large cuts of meats in the past. My goal was fast, fast, fast. Now, as the kids get older and eat more I'm in the "cook smarter not harder" phase and making larger cuts of meat definitely help.

I defrosted my brisket in the fridge for a couple of days and then pulled it out an hour before cooking so it could come to room temperature before putting it in the oven. I have started to do this with all my meats and it makes a HUGE difference in cooking to correct temperatures for medium rare doneness. Even chicken cooks more evenly when it's not straight from the fridge. 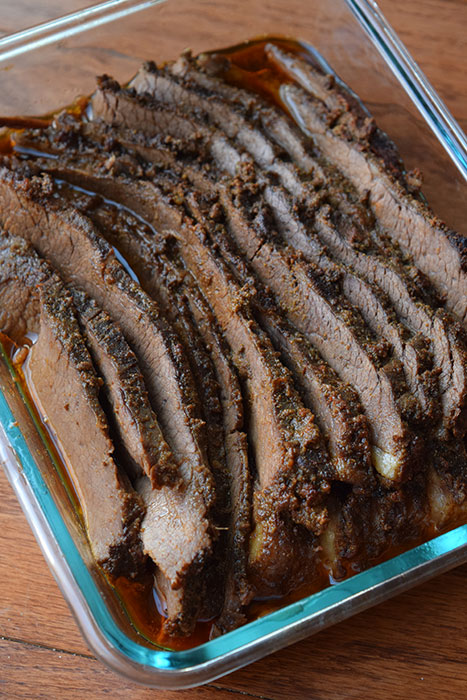 Unfortunately I didn't take a photo of my brisket prep. I wasn't planning on sharing but then it came out SO GOOD I felt compelled to. I'm hoping my experience inspires someone else who's timid with large cuts to take the leap. I will definitely be making this again!

Preheat the oven to 300 degrees.

Lay a large sheet of aluminum foil over a roasting pan or cookie sheet,  making sure it's large enough to wrap the entire piece of meat.

Sprinkle both sides of the brisket liberally with salt and pepper. Place the brisket fat side down in the center of the aluminum foil.

Sprinkle on the cumin, garlic powder and paprika then splash with Worcestershire and drizzle on the molasses. I didn't actually measure anything so all amounts listed are an estimate. This type of cooking isn't a science. Go with your gut. If you like garlic add lots. If you aren't a fan cut back or even remove. The spices are just for flavor. I would say you need a small sweet note, which is why I went with molasses. It's deeper than brown sugar or honey and added a wonderful flavor to the "juice."

Wrap the brisket in the foil sealing in spices.

Remove from oven and let rest until cool enough to slice. Mine sat on the counter for 20 minutes.

Slice against the grain and drizzle with the liquid from the foil. 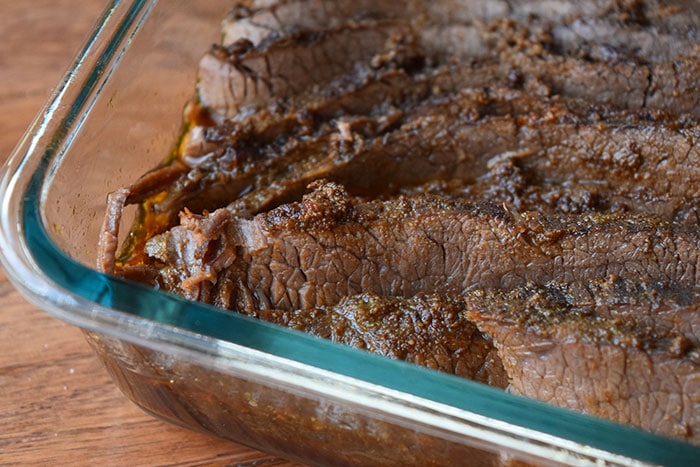 The whole family devoured this. The 11-Year-Old was concerned at first. He's not a big fan of beef stew and similar cuts of meats, but as soon as he took a bite he was sold. The 5 year-old, who needs to be coaxed to eat any protein, gave me little argument once he realized how tender it was. And The Husband, well he was in heaven. Totally his type of meal.

I was surprised to learn brisket is considered a lean cut of beef. There is visible fat on the outside I left on for the cooking process but it's easily cut away once cooked.

No nutritional values on this one. There are too many variables. If you're counting just weigh out your meat to calculate.