Yesterday I challenged myself to come one with a tasty lunch to use some leftover shrimp I had from our seafood night (I'm really trying to do a fish night at least once a week.) I bought some small shrimps on sale and boiled them for shrimp cocktail. The toddler ACTUALLY likes shrimp this so it's an easy way to get some protein in the boy. Especially as getting fish in him is getting harder and harder.

Anyway, I had exactly 3oz of shrimp left, just perfect to use for a solo lunch. I threw it together with some bulgur (cooks in 12 minutes), a few asparagus spears I had in the fridge and surprisingly a lemon that the toddler begged me to buy for some reason. Glad I I listened to him! It came in handy! 🙂 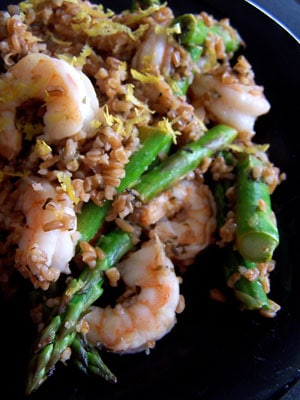 Zest the lemon. Then cut it in half.

In a small-medium sauce pan add the bulgur, broth, dried herbs, juice of ½ of the lemon and a bit of the lemon zest (save some for garnish). Bring to a boil and then cover and reduce to a simmer for 12-15 minutes until the liquid is absorbed.

When the bulgur is done. Remove from heat, fluff, and uncover.

Heat a non stick skillet over medium-high heat and spray with non-stick cooking spray. Clean and cut the asparagus in chunks. Add to the skillet and sprinkle with a bit of salt and pepper. Cook for about 2-3 minutes tossing to prevent sticking. Add the cooked shrimp and squeeze the juice of the other half of lemon on top. Toss a few times just to heat the shrimp a bit. Add the bulgar and mix everything together in the skillet.

Slide it onto a plate. Top it with the saved zest and enjoy! 🙂