I'm back with my CSA and loving the challenge of using what I get week-to-week. Every basket is an adventure!

This week 4 things really stood out for me. 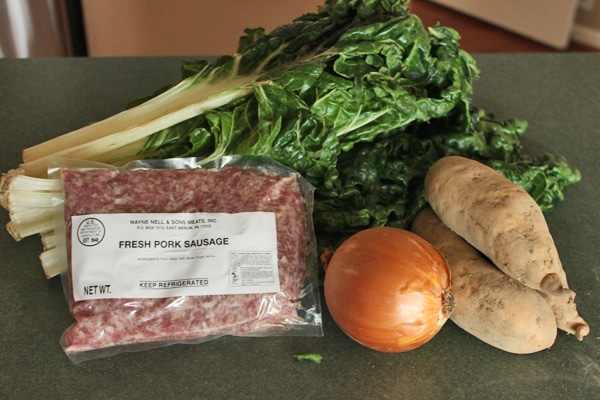 At first I thought the potatoes were just regular old white ones. 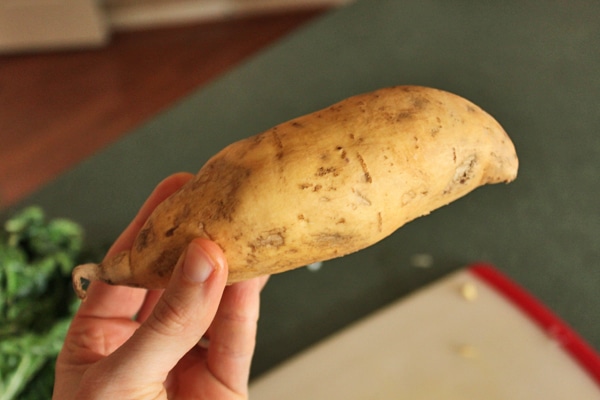 But when I cut into it I realized I was wrong. 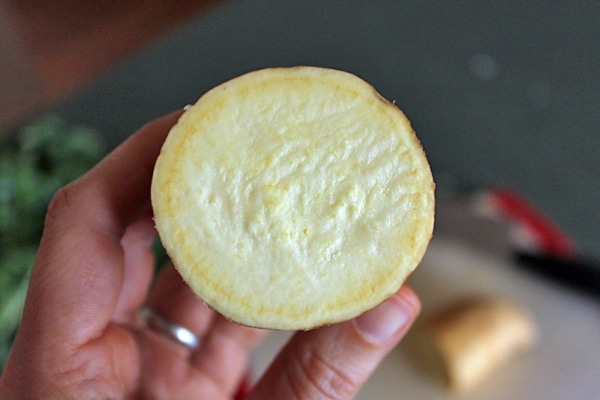 After looking up the basket info on the site, I discovered it was an O'Henry Sweet Potato?

Yeah, I never heard of it either! But apparently according to this seed site they are a golden flesh, dryer, more sweet variety of sweet potato.

Even if you've never been a fan of sweet potatoes before—you have to try O'Henry. Unique flavor is reminiscent of nuts and honey, not at all heavy and cloying. Your mouth will be watering before you even get it out of the oven—while baking it fills your kitchen with the aroma of sweet, warm honey. Golden flesh is string less and slightly drier than traditional sweet potatoes.

Even better, I thought, something new!

I love when I get to go down uncharted food territory for me. Sometimes it doesn't work out but this soup came out AMAZING! Way better than I ever anticipated! I'm having a bowl right now and it's so tasty and satisfying. The sausage adds a wonderful flavor to the broth. The weird white sweet potatoes are creamy, delicious and compliment the sausage and chard perfectly. I haven't had a chance to give any to the kids but the Husband surprisingly agreed with me and he's kind of an old school chicken and noodle guy. 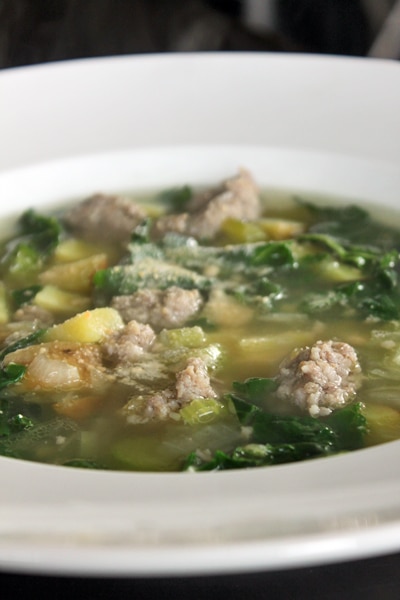 I'm going to share how I made it but remember if you don't have those O'Henry Sweet Potatoes available any potatoes would probably work. You could also take the casing off turkey sausage if you wanted to make it a little lighter.

Spray a soup pot with some non-stick cooking spray and begin to sauté the onion, garlic and celery. Add the sausage and break apart while it browns. Add the potatoes and continue to cook everything until the sausage is no longer pink. 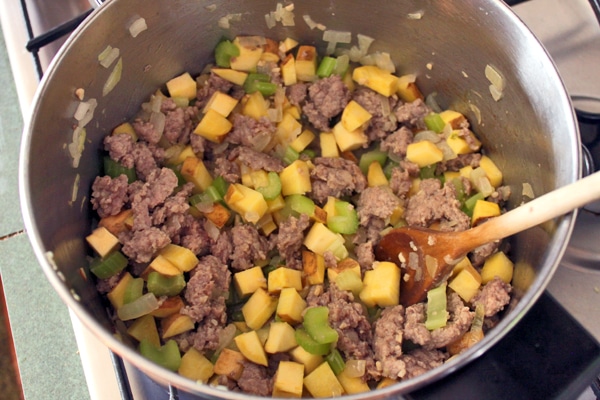 Add the broth and bring it to a boil 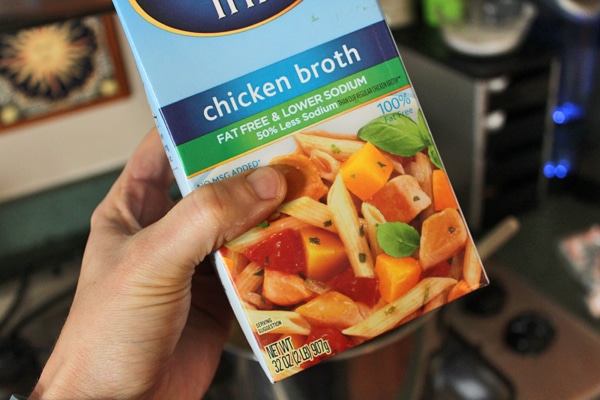 Once it boils, lower to a simmer and prepare the chard. 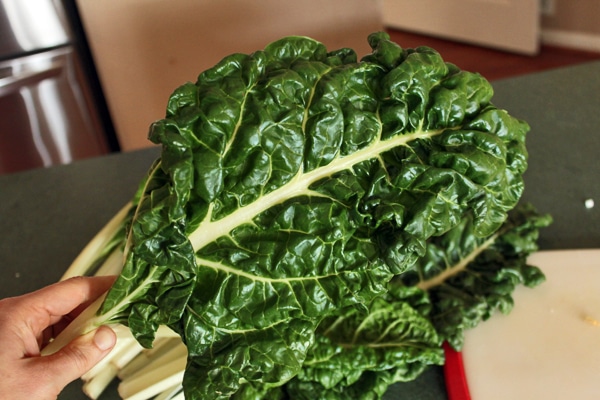 I decided not to put all the chard in the soup as it wilts and wilts fast! Instead I removed the stalks. 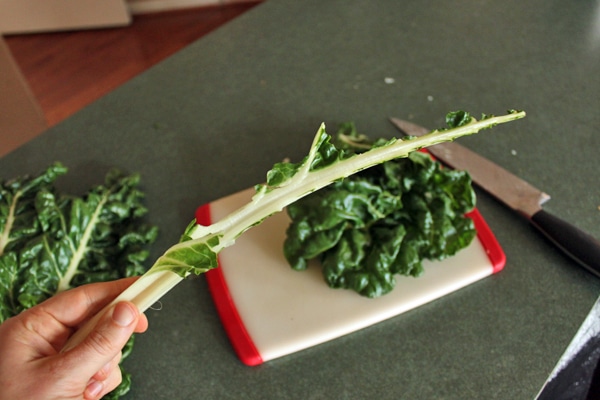 To remove all you need to do is grab the leafy part and pull upward.

I did this with each leave, then loosely shopped and placed in a large ziplock back with a paper towel to help keep them fresh.

When I was ready to serve I grabbed a handful of the chard and put it in a bowl. 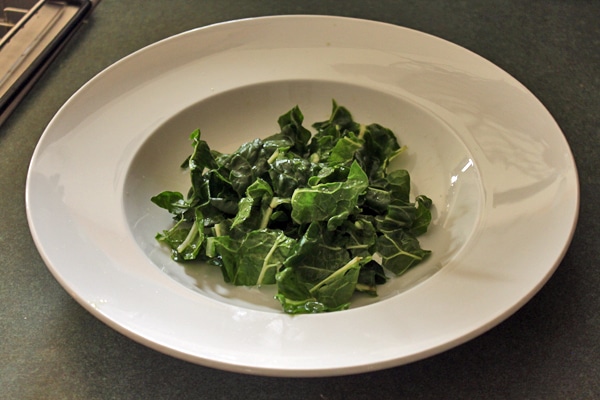 Then I simply poured the soup overtop. 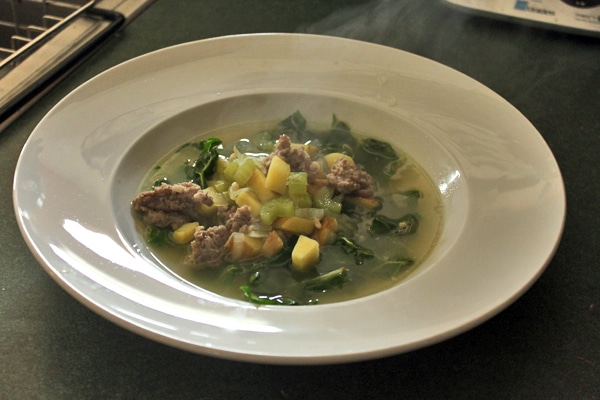 The hot soup wilts the chard perfectly without overcooking it. In my opinion this is the secret to soups with greens in them. You almost have to treat them as a garnish more then a major ingredients because if you add them too early they get overcooked and just make the soup look unappetizing.

That's it! I found a small sprinkle of parmesan cheese was a great compliment and my goal with every spoonful was a small bite of sausage, potato and chard all together.

I LOVE this combo!

Be prepared for more soup ideas. I'm obsessed at the moment!