Or I guess you can call them salmon patties. But being from Maryland, land of the crab cake, cake just sounds right to me. 🙂

Here's the story. Yesterday after an insane morning run I knew I was gonna be hungry and I knew the husband was gonna want to order in or go out (not only is it what he does BUT it was also the first college football Saturday of the season.) So to ward him if I just started cooking. I didn't have much on hand, I haven't gone shopping and I've been trying to use stock up for the move but I remembered a can of salmon I bought a few weeks back and I knew I had an aging pepper and some onion in the fridge. So why not!

At first the husband kind of snubbed the idea and then I made him a salmon cake sandwich. Initially I got the "it's ok." BUT when he was done he said it was really good! I was quite shocked! The child wanted no part. I swear, fish is the hardest thing to get into that kid.

Now I will say this, idea may need a better binder then one slice of a bread. The flavor was perfect but they just held together so you have to be gentle. Next time I'm thinking I'll crush some whole grain rtiz instead of using the bread. Either way I thought I'd share the idea. 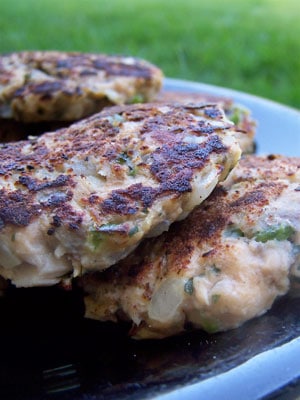 In a large bowl, gently mix together the salmon, bread, onion, garlic, bell pepper, egg, egg white, dill, parsley, Worcestershire sauce, tabasco and a pinch of salt and pepper. I used the scoop technique. Scooping my hand under the tossing in the bowl rather then a meatball squishing method. Know what I mean?

In another small bowl mix the flour and parmesan cheese with a bit of salt and pepper.

Heat a large non-stick skillet over medium high heat. Form a small patty about ½ inch think. Dust with the flour mixture and plop into skillet. Repeat for 3 more patties and cook each about 3-4 minutes a side. They should be nicely browned. Now, I made my first too big. Go on the smaller end, they will hold together better and you want to get 8 total, for 2 a serving.

Once the first batch is done remove any bits from the pan and re-spray with non-stick cooking spray.

Eat straight up with your favorite veggie as a side OR put it on a whole wheat bun for a salmon cake sandwich. I used a whole wheat potato roll, a bed of baby spinach and (don't laugh) a squirt of ketchup. 🙂 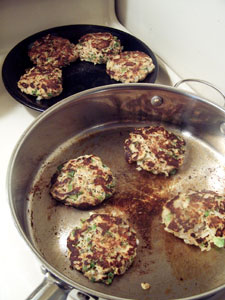 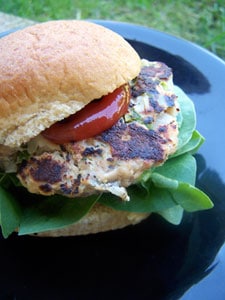