I STILL haven't gone grocery shopping since before Thanksgiving. Do you believe it? I just haven't had the time and frankly, I don't want to spend the money. Between traveling this weekend and Christmas shopping I'm spent in both the time and money department. Ahhhh gotta love the Holidays! note: Actually I DO love the holidays.. I'm just whining. 🙂

Anyway, I knew yesterday was going to be a busy day so I decided to pull out the old crockpot. I stumbled across this recipe for Crockpot Cabbage and Sausage and it's simplicity intrigued me. I happen to have a head of cabbage leftover from the farm (is it me or does cabbage have a long shelf life?) a package of frozen turkey sausage in in the freezer and a few of those awesome potatoes I reviewed the other day.

I threw everything in the slow cooker and crossed my fingers! Anytime husband or child would ask what I was making I'd simply say, "sausage". I've learned not to go into the details with them. Simply present the meal in the most basic terms and you get no faces or arguments.

I set the plates out at dinner with surprisingly little discussion. Little Man simply asked, "where are the sausage?" Once I pointed them out, he went to town. The husband didn't say a word. Not ONE. He just started eating. I think I was in shock. At one point Little Man asked what the other "stuff" was and I said cabbage. Before I could say anything else the husband, yes MY husband, the one who could eat mac & cheese every night for dinner says, "Oh Try it Ryan, the cabbage is delicious!"

Little Man tried it but decided he didn't like it. So he stuck with the sausage and potatoes. 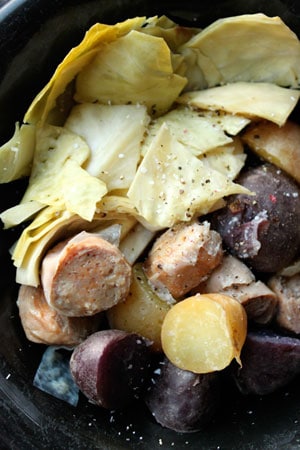 The husband ate his whole plate. His only feedback.... "it was a little salty."

Layer everything in the slow cooker. Start with the onion and potatoes. If you have larger potoatoes, cut them in halves or quarters. 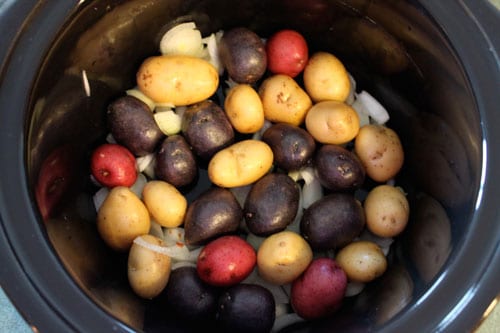 Top with the cut sausage. I pull my sausage right out of the fridge and pop in the microwave for 1 minute to soften them just enough for cutting. Makes my life a whole bunch easier. Put the frozen cut sausage in the pot... 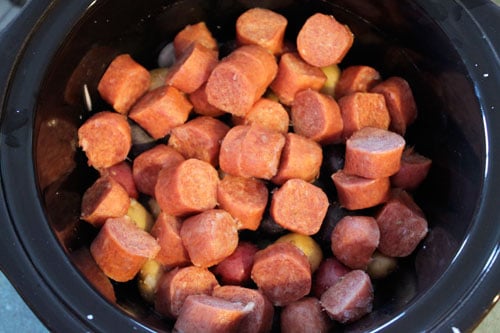 Top wedges of cabbage. Apparently I salted too much but I still think a bit of kosher salt is needed. Maybe even some fresh ground pepper. 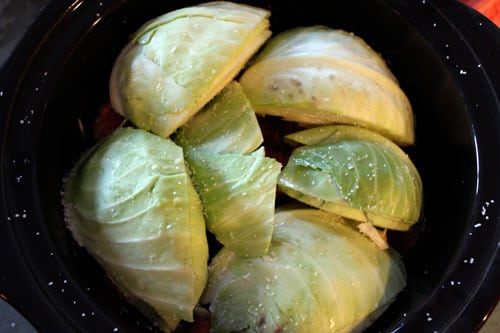 Pour ¼ cup of water over everything (or broth) just to get the steam started. This isn't really a stew (although you could turn it into one) more of just a simple way to have dinner ready on a busy day.

My family isn't into stews as much as I am. If it were up to me I would have cut the cabbage in cubes and added a can of broth and diced tomatoes for a more soupy/stewy dinner. Either way, it works.

I cooked mine on low for 7 hours. The potatoes were soft and creamy, the sausage cooked through and the cabbage was done without being mushy. If you like a softer cabbage simply cut your wedges in half. Smaller the cabbage pieced the faster it will cook.

Serving size on this one is tough for me. According the potatoes I had about 4, sausage 6 and I don't measure things like cabbage. We had 3 large bowls last night and I have at least 2 servings leftover in the fridge so I'm going to put it at 5 nice size servings, it's just too hard to measure by the cup.