I finally got a chance to cook! The end of my week was a bit insane and we ate out more then I'd like to admit. Let's just say I pulled these pork chops out for Wednesdays dinner. It's Saturday.

Anyway, if you don't know, Schnitzel is normally a veal cutlet pounded thin, breaded, fried in butter and served with lemon. I just took the idea and used pork for the veal, bran flakes for the breadcrumbs, and non-stick cooking spray for the butter. I also made a quick gravy and added a hint of lemon just to give the traditional recipe a nod.

Surprising the husband loved it! I don't know if it was just because he had three separate food items on his plate or what, but I got an unsolicited "This is Delicious!". Which cracked me up as I thought the meal was just OK. The meat was good but the lemon was a bit too tart in the gravy for me and I should have added more spice to the "breadcrumbs".

The toddler? Well let me tell you I may have the only child in America that doesn't like breaded things. As soon as he sees anything breaded (that's not a nugget from a fast food chain) he declares he doesn't like it. It doesn't matter if it's fish, chicken or pork. He had his one bite (my rule) and then finished off the noodles and peas. Oh well, you can't win them all. 🙂

Cut all visible fat from the pork chops. Lay between two pieced of wax paper or saran wrap and pound thin. About ¼ of an inch.

Place the cereal and a pinch or two of black pepper in a large ziploc back and pound as well. You could run through the food processor or blender but I wanted larger panko style bread crumbs.

Crack the egg in a bowl. Pour the bread crumbs on a plate.

Dip a flattened pork chop in to the egg and then place in the crumbs. Coat both sides. Repeat for the remaining 3 chops.

Heat a large non-stick pan or griddle on medium-high and spray with non-stick cooking spray. Cook the pork about 4 minutes until you see the edges starting to turn white and the crumbs on the bottom darkening. Flip and cook an additional 3 minutes. I did 2 chops at a time as to no overcrowd the pan. 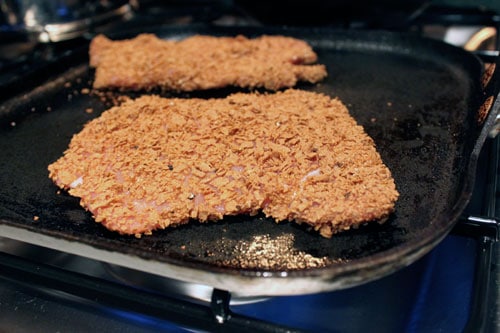 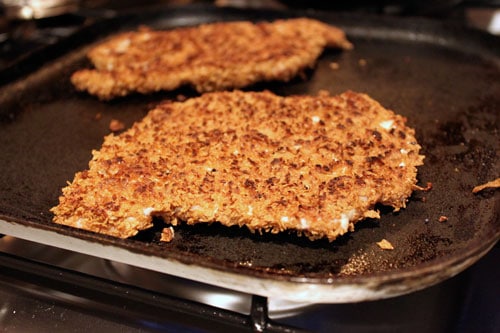 Serve with a lemon wedge, ketchup (the only way the toddler would take a bite) or a simple gravy. Here's what I did. . .

Whisk all together then bring to a boil in a small saucepan. Watch so it's doesn't boil over. Lower to medium-low until ready to use.

I made this first and had it simmering while making the pork. We also used it over noodles. I should add the toddler loved those! 🙂

The nutritional estimates are only for the pork NOT the noodles and peas. . .