I don't know WHAT came over me yesterday. I just felt like cooking ALL day. It started with the Tropical Pineapple Core Smoothie. Then the toddler and I made some Homemade Whole Wheat Thin Crust Pizza Dough for lunch. And the whole time I had this soup on the stove.

I knew I was only making it for me. The toddler has declared his hate of soup multiple times and if it ain't Chicken Noodle or French Onion the husband won't bother.

So I decided to REALLY make it only for me. Inspired by a bag of dry pinto beans that have been in my pantry for well over a year and some stock I recently made from a beer can chicken last week, I went to town.

I normally use canned beans but the dry are so much cheaper and they really aren't that hard to work with if you'll just be hibernating in the house on a cold Saturday. That being said you could easily replace the dry with a few cans. Remember, it's just an idea so if it sounds good take it and run. 🙂 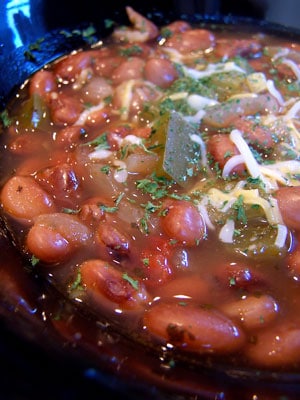 Soak the beans over night or do the quick boil method (what I always do as I never know I'm going to use beans the night before.) Bring the beans to a boil in a large pot. Boil for 5 minute. Then cover and simmer for 1 hour. ---Go play with toddler. 🙂

Drain and rinse the cooked/soaked beans set aside.

In a large pot add the olive oil and onion. Cook until just soft. Add the green pepper and spices. Stir to coat everything. Add the blended stewed tomatoes. Stir. Add the broth and beans.

Bring everything to a boil then cover and simmer. Cook until beans are tender, at least 2 hours. If I was prepared I would have topped with green onion like Kalyn did on her version but I didn't have any. Instead I used a bit of cheese and cilantro to make the picture a little better. 🙂

Now I stink on the Nutritional Info for soups and anything with beans in it. So this recipe scares the crap out of me! 🙂 Here's what I'm getting with my cup estimations. Just remember this is approximate and even if we're off we're still eating a healthy soup. 🙂