Believe me, I never thought I would put those three things together either. Pumpkin? Sausage? Spinach? But Oh.My.Word! So yummy!

I saw Rachel Ray make something similar a while back and I think she used fresh sage and nutmeg. So those are the flavors I stuck with. Of course starting with a base of onion and garlic.

The result was surprisingly delicious! The sausage helped flavor the pumpkin sauce and using fusilli (curly pasta) helps the pumpkin stick to the noodle guaranteeing The Husband and Little Guy would be eating it. 🙂 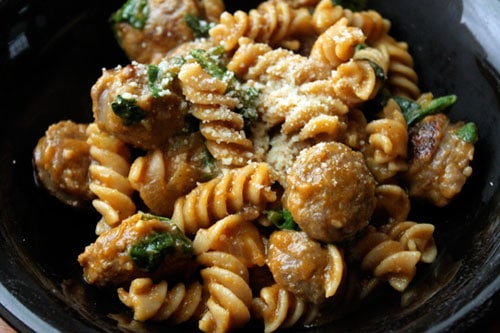 Speaking of, I did NOT tell them what I was making. I just told them we were having sausage and pasta. At one point the husband came over to give it a stir and I cringed thinking he was going to ask me what it was. Instead he simply said it looked and smelled good. I was shocked.

We sat down to eat and the only complaint they had was the spinach. Both kind of moved it out of the way to get to the pasta and sausage. but hey... They ATE it without argument. Win in my book.

I did tell them it was pumpkin afterwards and their reactions were priceless. The Little Guy was ecstatic, thinking it was cool. The Husband? Well he said he would never eat it again. Jokingly, of course. 🙂

Oh! I got creative with sausage tonight in honor of the Johnsonville Pastaville Italian Sausage Recipe Contest. Keep you eyes peeled later this week for a special giveaway in honor of the contest! 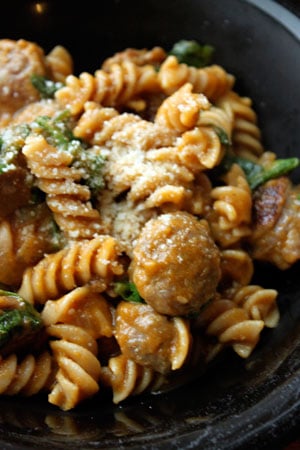 I recommend keeping the sausage frozen as it's easier to cut. Simply pull the package of the freezer, pop in the microwave for a minute and then cut in slices.

Put up a pot of water and cook the pasta according to the package.

While waiting for the the water to boil, heat a large skillet over medium-high heat. Spray it with non-stick spray and brown the sausage with the onion and garlic.

Once brown add the chicken broth and bring to a boil.

Lower to medium and add the pumpkin, yogurt, sage, nutmeg, salt and pepper. Stir to combine everything. Keep on medium until the sauce begins to boil again then lower to a simmer.

By this time the pasta should be done. Drain and add to the skillet with the pumpkin and sausage. Stir to coat and combine everything. Add the spinach and stir in until it wilts.

Serve with a sprinkle of parmesan!

I'm getting 5 servings out of skillet, each just under 2 cups. The nutritional information is based on turkey sausage which is much leaner then traditional.