This isn't a traditional GreenLiteBite's recipe post. I'm just sharing what I made for dinner tonight in hopes it will inspire you to 1.) Seek out new and fun produce and 2.) Try new flavorful spice combinations.

Let's start with the Moroccan Spices. Earlier today I saw a tweet from Andrea of Andrea's Recipes and she mentioned Moroccan style seasoning. 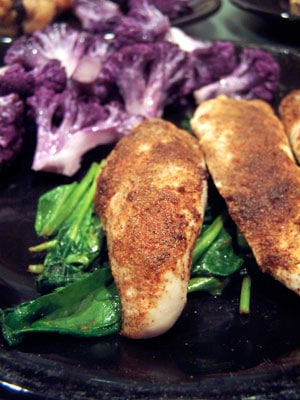 Not knowing exactly what that meant I asked her and she was nice enough to share her recipe.

I actually had all of those spices in my pantry so I decided I would whip it up and try it on some chicken I was defrosting for dinner.

Later in the day Ryan and I hit a farm stand and became mesmerized by this... 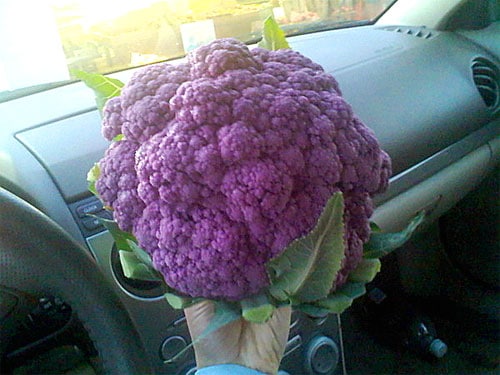 ... a beautiful head of purple cauliflower. I never saw such a thing! We had to buy it. I'm glad we did! Besides tasting good apparently there's some benefits to purple veggies.

So I roasted the purple cauliflower and sprinkled my new Moroccan Seasoning on some boneless chicken tenders. To round out the plate I simply wilted some spinach leaves in a skillet with a teeny bit of olive oil, salt and bit of the Moroccan spice blend.

It was a quick easy meal once my oven heated up. I loved the spices and chicken served over the spinach but both husband and child could have done without. They stuck with simple chicken legs. However both gobbled up the cauliflower that I simply roasted with some kosher salt. 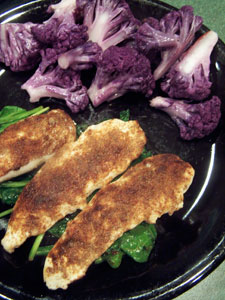 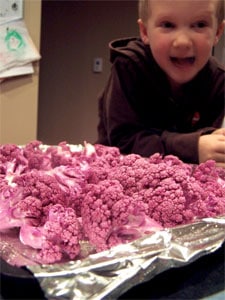 I hope this gives you some idea for dinner this week. Try the Moroccan spice blend. It really is delicious! I'm gonna try it on popcorn and squash seeds as Andrea recommended. 🙂