I'm finding the best way to make a dent in my vegetable stores is soup. Last week I made Fresh From the Farm Vegetable Soup with Leeks and Kale which was awesome. Then I used up my tomatoes making a quick Homemade Garden Tomato Soup which I'm sad is gone. 🙁

Well I'm happy to say my fridge is stocked yet again with a homemade veggie filled soup but this time I went for SPICE!

I have found that the spicier the meal the more satisfying it is. And I don't mean spicy-hot I mean spicy-flavorful.

I've experimented with Moroccan spices before. They intrigue me. I think it's because I didn't grow up with anything even close to tasting Moroccan. I love the addition of cinnamon and nutmeg to savory dishes and I've learned so much about new-to-me spices like coriander and turmeric.

This soup has a lot of flavor. The summer squash cut a little larger gets soft and soaks up a lot of the flavor and I love the combo of large couscous, lentils and chickpeas. Here's what I did, be warned it uses a LOT of spices. 🙂 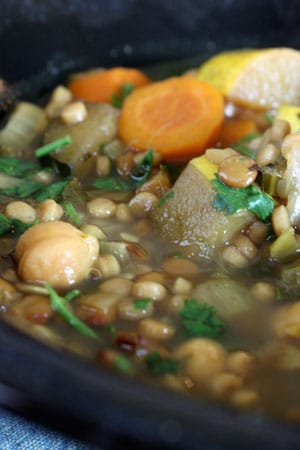 Here's my soup making set up. This is everything I pulled out to make the soup. 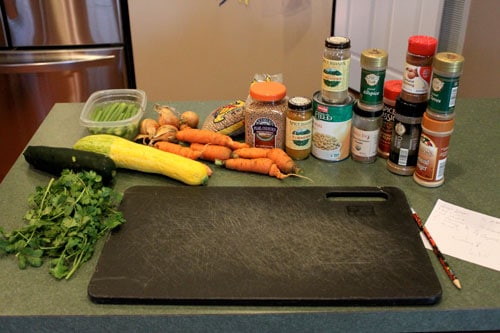 Heat the olive oil in a large stock pot over medium high. Cook the onion, celery and carrots until the onion start to become transparent and browning. Stir in the cubed zucchini and cook for another 2 minutes. Add all the spices and lentils. Stir to coat everything. Add the broth, water, and can of chickpeas (with liquid.) Bring to a boil and then simmer for an hour.

After the hour add the couscous and let cook until softened, about 20 minutes. I was SO excited when I found this at my local grocery store. You can also get it online at Amazon. 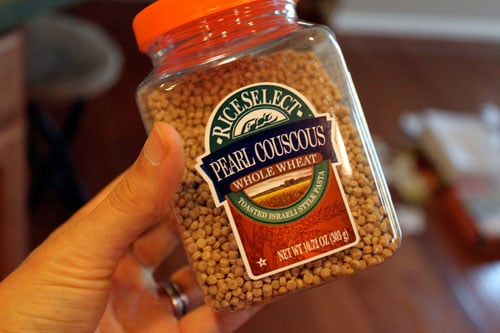 Stir in the fresh cilantro just before serving.

I measured out exactly 12 cups and a cup was very filling! Just so you know, I did add a little sprinkle of kosher salt. I used the broth and canned chickpeas and I thought that would season it enough but it needed just a bit more.