Even though the husband isn't, I'm a HUGE fan of one pan meals. A grain, a protein and tons of veggies in one easy casserole dish, you can't go wrong.

Is this a casserole? Hmmmm Not sure. I tend to think of cheesy, pasta-ish style dishes as “casseroles” but I think this applies as well. You'll have to let me know.

As for the husband, he actually liked it! He loved the fish but left most of the quinoa. I just can't sell him on that stuff. 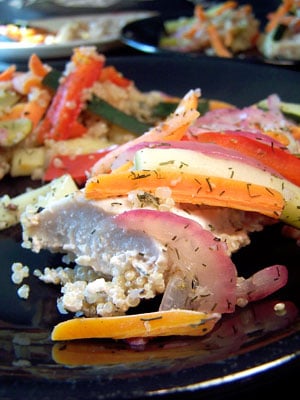 The toddler, well, he ate it but I had to coax him a bit. I think this dish was a little too much for him. But he had a few bites of the fish and did call the quinoa rice while eating it and I wasn't about the argue. :~)

Cut the carrots, zucchini, and peppers into thin long slices, like matchsticks. Slice the Red onion thin and run the garlic through a press. Add all the veggies into a large bowl and toss with lemon juice, dill and pinch of salt & pepper. I made this a few hours ahead trying to save time. Although, I don't think you have to. Honestly, I wanted to eat it raw! It was so pretty and fresh. (Maybe I'll base summer salad on this idea???)

Add the dry, uncooked quinoa to a large casserole dish along with the cup of broth. Mix and spread to coat the bottoms.

Lay the fillets on top of the quinoa. Sprinkle with a bit of Kosher Salt and pepper.

Top the fillets with the fresh veggie salad made earlier.

Top and seal with aluminum foil. Bake for 30 minutes until the fish is flaky. Serve!

Here's a before & after shot, fresh steam and all! 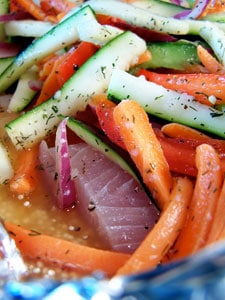 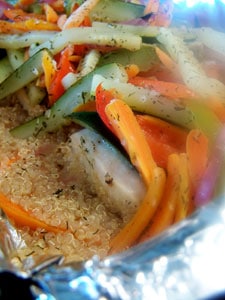