Have I told you about the toddlers obsession with Chinese food? He LOVES Low Mein and Chicken with Broccoli. He even attempts to eat with those kid chopsticks they hold together with a rubber band. It's totally cute. So for lunch yesterday I thought, why not make a homemade version with what I had on hand?

To my surprise... He liked it! 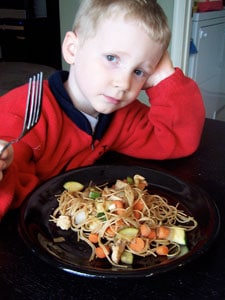 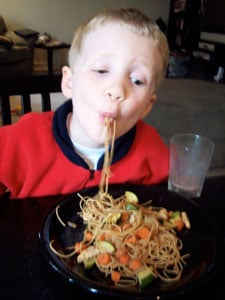 Although after the picture taking session a mom/som battle of epic proportions began. After about 4-5 bites he declared "I'm Full."

"OK" I said, as I don't like to force him to eat past fullness. However, I save the plate and if he returns (in a reasonable amount of time) and asks for a snack I make him finish his meal first. Well, that's exactly what happened yesterday. About 10 minutes after leaving the table he asked for candy. I told him he needed to finish he lunch first. (side note: I only gave him half a portion although kept the full portion in his pictures.)

Without going into all the nitty gritty details, the next hour was SHEER torture for mom and child alike. I wasn't giving in and either was he. He'd ask, I put the plate on the table. He'd cry. I told him he didn't have to eat it IF he wasn't hungry BUT he wasn't getting any candy until he did. Tears, yells, and cries later a majority of his lunch was gone and he TOTALLY forgot about the candy. LMAO So whole grain pasta, zucchini, carrots and chicken eaten and NO candy. I chalk that up to a win for mom. ;~P

Anyway, I'm still marking it as toddler approved as he never stated he didn't liked it and when I asked him if he did he said yes. Which makes the whole mom/son battle completely illogical. KIDS! *sigh* 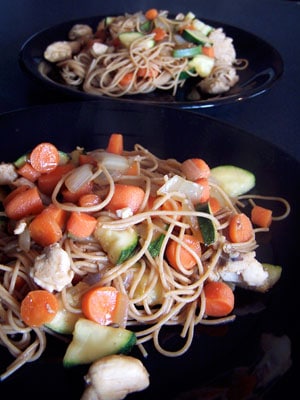 Meanwhile, heat a large non-stick skillet over medium high heat and spray with non-stick cooking spray. Brown the chicken with the onion and carrots. Add the zucchini. Lower the heat to medium.

Whisk the soy sauce, vinegar, ginger, oil and chicken broth together. Set aside.

Stir the chicken and veggies. By this time your water should be boiling. Add the pasta. Cook for 3-4 minutes or until desired doneness.

Drain the pasta and plop on top of the skillet. Pour the soy sauce mixture on top. Work the pasta around the veggies and chicken, it will want to clump together. Keep stirring until they are well mixed up. Lower the heat to a simmer and cook until most of the liquid is absorbed, about 5 minutes.