This is my first entry for the Royal Food Joust! A monthly contest the Leftover Queen hosts on her site where she identifies three ingredients and we see what everyone can come concoct in their kitchen. Then her readers vote for a winner at the end of the month.

I think this is genius! What a fun idea! And you may not know this about me, but I LOVE a challenge.

This month’s ingredients are lentils, eggplant and cinnamon. For some reason I was immediately inspired to make a veggie/lentil burger. I had one at a local restaurant a few weeks ago and the idea stuck with me.

If you believe it, I actually got the husband to try a bite! He didn’t like the texture at all, which I understand. You are either a person who likes lentil burgers or you aren’t. It’s that simple, they hold together nicely but do have a “mush factor” to them. 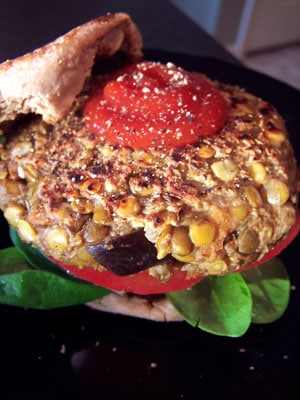 Bring the lentils, broth, cinnamon, curry, sage and paprika to a boil over high heat. Then lower to a simmer. Continue simmering for about 45 minutes to an hour until the lentils soak up most of the broth.

While the lentils are cooking, cube the eggplant. Lay it out on some paper town and sprinkle with kosher salt to draw out some moisture.

After the lentils have been cooking for about 45 minutes, turn off the heat and stir in the eggplant. Let it sit for about 15 minutes.

Add the lentils and eggplants to a large bowl. Grate in the carrots, garlic and onion. Stir in the quick oats, breadcrumbs and egg.

Cover with some plastic wrap and let it sit for a about 10 minutes in the fridge (note: I made half in 10 minutes and left the rest of the mix in the fridge overnight, the next morning the lentil mixture was even thicker).

Form the mixture into 6 patties and brown in a nonstick pan sprayed with non-stick cooking spray over medium heat for about 3 minutes a side.

I served it on a whole-wheat English muffin with baby spinach and tomatoes slices. It was a bit soft (compared to a traditional burger) but tasty and ohh so filling! I can’t believe I just made my own veggie burger!