Home » Food Photos » By Meal » Dinner Ideas » The "OMG I got them to eat Kale and Bulgur without one single complaint" Stuffed Peppers!

Sorry, is that name too crazy? I just get so psyched when I get good stuff in my boys! Especially when they eat it willingly!

Now let me warn you. Normally I write up and post a recipe immediately after I make it but this one has been sitting in the old noggin for a few days. I whipped it up on Friday after coming home form work early due to the SNOW! Sorry, to keep mentioning it but it's totally crazy. We are in the middle of our second record breaking snow fall this week! But I digress. 🙂

So I whipped this up after work and to my surprise BOTH the child AND the husband ate it without complaints. No bargaining had to happen. No whining. No faces or dirty looks. Nothing!

Not only that but the husband actually said they "were good" unsolicited! This is a HUGE win considering the major ingredients were kale, mushrooms and bulgur. They didn't even question the "green stuff"! 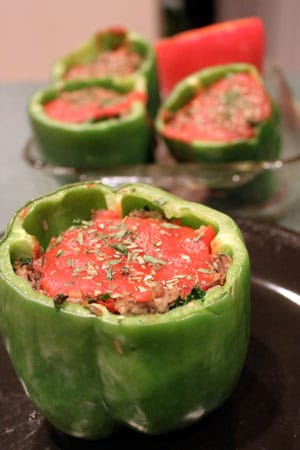 Prepare the bulgur according to the package. The formula is twice as much liquid as bulgur. Bring both to a boil and then cover and simmer for 12-15 minutes until the liquid is absorbed. So I used ¼ cup of bulgur and ½ cup water.

Cup the tops of the peppers off. You can blanch but I don't. We like ours to stay crunchy. 🙂 I also dice up any good pepper parts of the tops and use it in the filling. You know, the stuff around the stem.

Spray a large skillet with non-stick cooking spray and heat over medium heat. Sauté the onion and garlic with a little salt and pepper. Add the mushrooms and cook until they reduce a bit. The liquid will come out of them. Add the turkey and brown, breaking it up as it cooks.

Once the turkey is all brown (gray) add the chopped up kale, cooked bulgur, and oregano. I also added the diced peppers I got from the tops. Continue cooking for a few minutes until the kale wilts and all the flavors merge.

Fill the peppers with the stuffing. I only had 5 peppers that I could have overstuffed but I added a red pepper and stuffed them modestly. The red one was huge so you should have more then enough for 6 average sized green peppers. 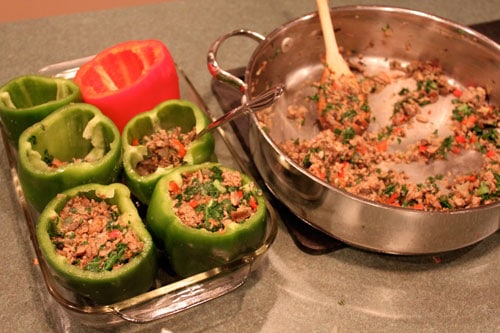 Top each pepper with some tomato sauce and sprinkle with some dried herbs. Bake for about 20 minutes until the peppers just start to scorch on the ends but still hold a crunch.

Here's an inside shot... 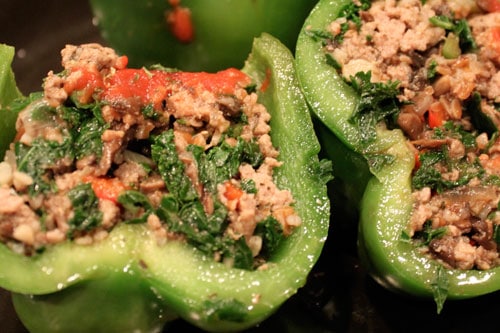 And my boys EATING them. 🙂 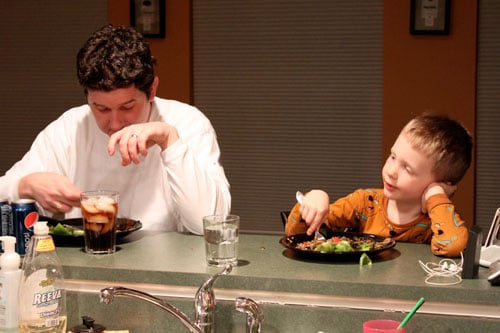 Two peppers make a good serving but I'll do nutritional info per pepper in case you want to serve with something else. Plus it's easier to double the nutritional info then half it. At least it my brain. 🙂