I felt like I was on an episode of Dinner Impossible tonight. My mission... a healthy family dinner in under an hour using my new kitchen with an electric stove, no counter space, less then half my normal kitchen tools and no help.

The idea was to make a light meal. What I call a summer "steak" using fresh veggies and extra lean ground turkey. I had some Swiss Chard from a recent farmers market trip but you can easily swap it for some fresh spinach. This was my first bunch of chard and I'm liking it. It's a hardy green that has a BUNCH of health benefits. I'm just happy I got my family to eat it as I know they would never go for it straight up.

It was a success! well... sort of. The toddler declared he didn't like "the chicken" but he ate it without much argument. The husband also ate it without any complaints. I'm not sure it was what he expected when he asked for a meat and potato meal but it passed. 🙂 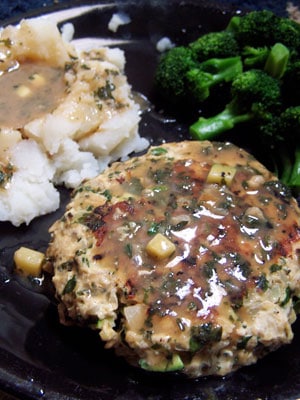 Hand mix all the Turkey Steak Ingredients together and form 4 large patties. You could make 6 smaller ones but I didn't have the pan space.

Heat a large skillet over medium high heat and spray with non-stick cooking spray. Once the pan is hot add the patties and cook 4-5 minutes a side until brown.

While the patties are cooking whisk together the gravy ingredients. Remove the patties from the pan and deglaze with the gravy mixture. Bring to a boil. If it's not thick enough whisk in a bit more flour. Lower to a simmer and add back the patties. Cook for an additional 10 minutes flipping once to coat the 'steaks'.

I served with my mashed potatoes and a side of broccoli. Leftovers are packed for lunch tomorrow! 🙂