This idea is inspired by an old favorite of mine, Butternut Carrot Chicken Soup/Stew, which I haven't made in ages. Mostly because butternut squash has been out of season until now.

I decided yesterday felt like a crock pot day. I just didn't want to worry about dinner and I had defrosted chicken from a recent grocery store trip, carrots and a butternut from the farm. It was perfect! Why not just throw everything in!

Which is exactly what I did and once the husband caught wind of my plan his exact quote was, "I thought you were going to make something normal."

LMAO He's been worried since my failed turkey loaf. Plus Butternut squash is NOT normal, in his opinion, but he's a good sport so he ate some for dinner even though he wasn't a fan. However! The little guy, immediately said,

To which I responded, "How do you know? You haven't tried it."

Regardless.. he had TWO BOWLS! He didn't eat as much of the bulgur but downed the chicken and carrots. Total win in my book.

Me? I LOVED it! I'm eating the leftovers for lunch and it's even better the next day. What's not to like? It's a bowl full of warm, veggie goodness on a miserable rainy day. Total comfort food made from all healthy awesome ingredients. A Win-Win for me! 🙂 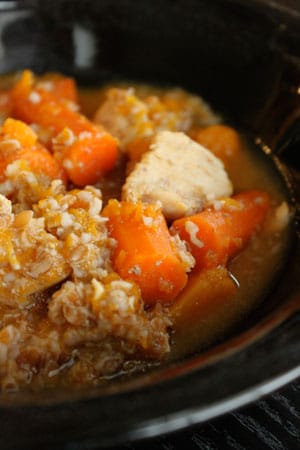 Add the butternet, carrots, chicken and spices to the crockpot. You want the carrots on the larger end and the butternut on the smaller end. This way the carrots hold together but the squash breaks down. 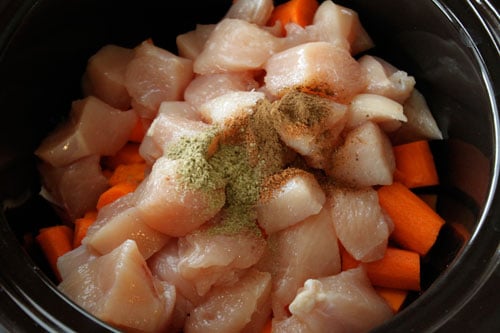 Add the 5 cups of water or broth. 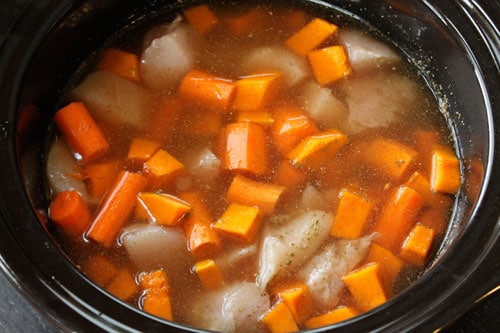 I cooked on high for 4 hours but I'm sure 8 on low would work too. 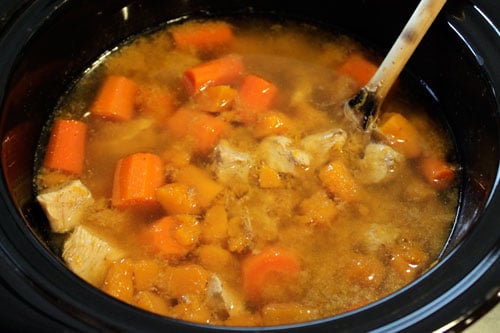 After 4 hours I shut the pot of and added the dry bulgur. Honest here.. this was not in my original plan BUT the stew was too watery for my taste.

Cover and let sit for ½ hour. 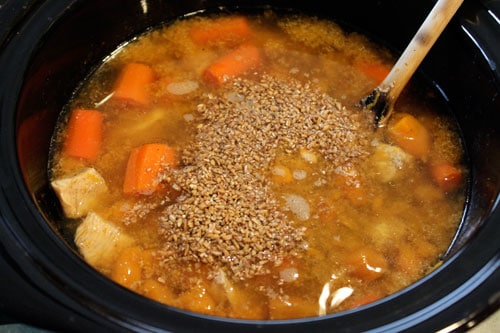 After at least ½ hour uncover and stir. You are ready to eat! 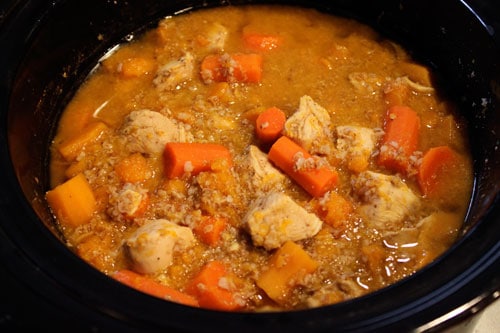 I got 9 cups out of the crockpot (I'm getting better at measuring. 😉 but I got 5 servings out of it. We had 3 last night for dinner, I'm eating one now and I have another fridge. So I'll give the nutritional info per cup and let you decide. I think that's how I'm suppose to do it, right? Even at 2 cups which is a nice size serving (what I'm having now) it's only 6 points. That's a lot of food for 6 points!