I don't know WHAT came over me. I had these thin cut pork chops and I just went to town. I swear cooking is becoming a creative outlet for me more and more. I just love it!

So this idea was totally inspired by fall and my recent trip to a local farm where I bought a bunch of apples and a giant butternut squash. I love winter squash and apple together. I blended the two in Winter Squash Soup with Roasted Seeds but this time I cubed them and added a bit of bulgur. What a great stuffing for pork or even just a side dish!

As for family approval I got the customary "it's good" from the husband who did eat a whole serving. The toddler also ate the whole dish without complaint although I did cut the pork and put the stuffing on the side, separated on his plate. I do have to add this was the FIRST time I have gotten both boys to eat bulgur, without complaint. I was shocked.

I will definitely be taking these leftovers to lunch tomorrow. 🙂 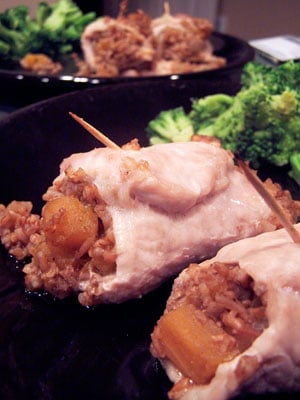 Heat a medium sized saucepan over medium-high heat. Spray with nonstick cooking spray. Add the onion. Cook for a minute or two until just turning transprent. Add the butternut squash and pinch of salt. Cook the butternut for 2-3 minute tossing occasionally. The bottom with start to brown. That's OK we will deglaze the plan. If it's getting too dark lower the heat to a medium.

After the 2-3 minutes add the cubed apple, nutmeg, and all spice. Cook for another 2-3 minutes stirring occasionally.

Add the broth and the bulgur. Crank up the heat to high and bring to a boil. Once boiling, cover and lower to a simmer. Simmer for at least 15 minutes allowing the bulgur to absorb most of the liquid. 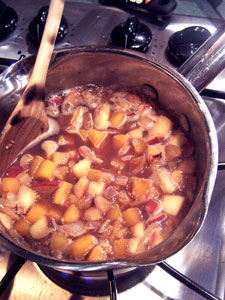 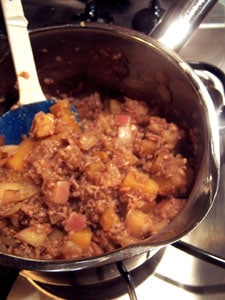 While the bulgur is cooking preheat the oven to 425 degrees. 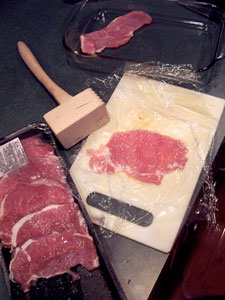 Even though the pork is cut thin we are still going to pound it thinner. Lay a chop on a cutting board. Cover with plastic wrap and pound a few times with a meat mallet or rolling pin. Repeat for all chops.

Once bulgur is done begin stuffing the pork. Lay out a thin chop. Using a soup or tablespoon plop some of the bulgur mixture in the middle. Fold over the ends of a pork and fasten with a toothpick.

Place the stuffed chops in a baking dish. Cover with aluminum foil and bake for 20 minutes. Uncover and bake for 10 more.

I served with a side of broccoli. Here's a little before and after baking shot. 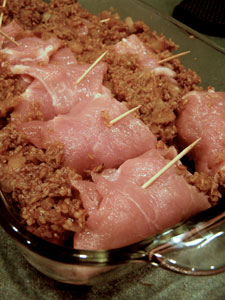 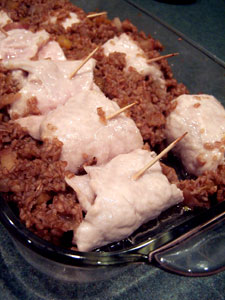