If I had to choose one thing about summer I couldn't live without, it would be chilled watermelon on a hot day. I have fond childhood memories of spitting seeds while eating giant slices with my cousins. It's one of those simple pleasures I'll never take for granted.

I've been a bit lazy in the kitchen department since coming home, and I don't see it getting any better with three more trips planned before the end of August. I'm committing myself to keep a fridge stocked with fresh fruits and veggies from the farm stand hoping it inspires me when I am home. That's what happened yesterday while trying to figure out what to make for dinner. I spied the watermelon and blueberries and thought, why not?

I knew I'd only really be making this for me. The Husband isn't into fruit for dinner much and the kids would rather eat plain watermelon, but I made it anyway and I'm glad I did. 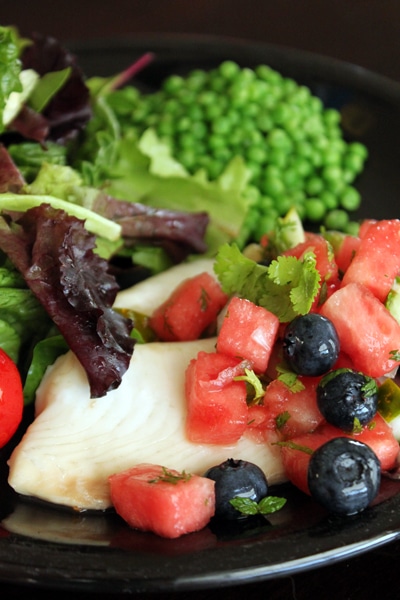 The salsa can really only be described as summer in a bowl. I topped a simple tilapia fillet with it and the two were a perfect match. I have some left and will be making fish tacos later. I can already taste the combo of corn tortilla, fish and this salsa. My mouth is watering just thinking about it.

Here's what I did:

Put everything in a small bowl and toss. 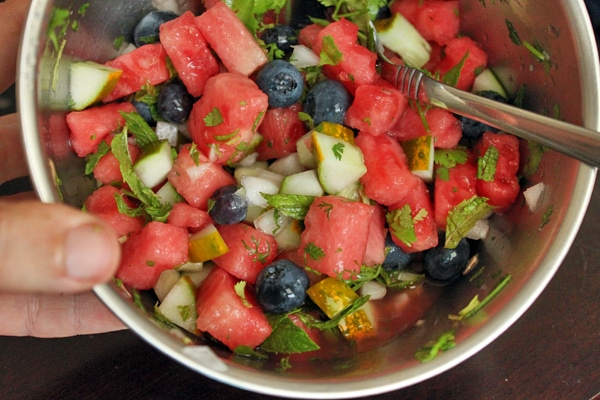 Refrigerate until ready to use, at least 20 minutes to give everything a chance to combine.

Use however you like. I topped simple baked tilapia fillets. 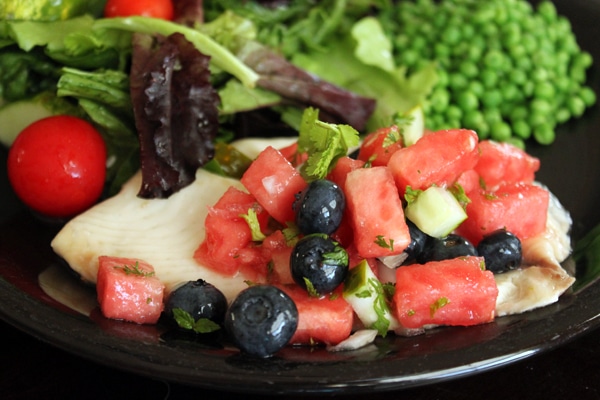 Here's the nutritional information for the whole batch. It's so low I'm just counting it as a serving and then you can divide if you portion it out.