I have heard a lot about agave nectar, and have a friend who makes delicious breakfast bars with it as a sweetener. I believe it is used to replace honey, and has a lower glycemic index. I was wondering whether you have used this sweetener, and also if you could explain your use of honey along with molasses: what does one offer that the other does not?
-Laura

I love this question because I get to give you my opinion. I love giving an opinion! It's probably a big reason why I blog. 🙂

But first.. Let's start with the facts. Here's a little chart of basic nutrition information for a ½ cup of each sweetener. I added maple syrup and sugar in there just for comparisons.

*Full nutrition information not verified for agave nectar but some sources say vitamin and mineral content is negligible. 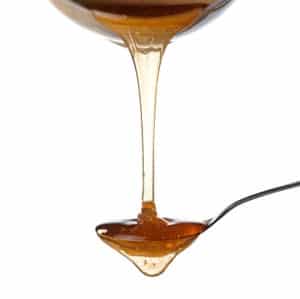 Now onto my opinion.

As you know I try to limit my use of white sugar. Just look at that table. It offers me nothing and frankly, I'm just not into empty calories. I do keep sugar on hand but I normally buy the sugar in the raw or organic evaporated cane juice as both of them are less processed and don't have everything stripped out.

You may notice plain old sugar actually has LESS calories per half cup than all of the other sweeteners. For the dieter this may seem like a benefit but actually honey and agave are both sweeter than sugar so you need to use less. Comparing molasses and maple syrup really isn't fair as they have a much more complex taste.

Agave nectar is an interesting option and I've notice there is a lot controversy about it. Food Renegade has an interesting articled called Agave Nectar: Good or Bad? that goes into a lot of detail. I don't think Agave is the end all be all sweetener that some make it out to be but I do like that you need less of it than sugar (I believe is 1.4 x sweeter.) I tend to think of it as honey-like without the honey flavor. It's simply just sweet. I use it now and then but don't currently have it in my pantry. I asked my favorite RD, Dave Grotto, as I couldn't find much detail about the vitamin and mineral content of agave nectar and here's what he had to say...

"The micronutrient content of agave nectar is barely worth mentioning. Agave does contain cancer fighting saponins & inulin though."

So maybe it offers a bit more then just plain old table sugar. I can't be sure.

As for me, depending on the recipe I normally use a combination of honey and molasses as it ads a complex sweetness without needing too much. In addition, both honey and molasses are shown to have additional health benefits and as you can see from the chart, they offer something besides calories and sweetness.

Molasses is probably my favorite but it adds such a strong flavor you can't use it as an all purpose sweetener. You can almost think of it as concentrated liquid brown sugar. Alone it's not all that great but used in a recipe it's adds a deep, dark, sweetness. It's also the one sweetener that contains the most vitamins and minerals. According to WHFoods.com,

"Blackstrap molasses is a sweetener that is actually good for you. Unlike refined white sugar and corn syrup, which are stripped of virtually all nutrients except simple carbohydrates, or artificial sweeteners like saccharine or aspartame, which not only provide no useful nutrients but have been shown to cause health problems in sensitive individuals, blackstrap molasses is a healthful sweetener that contains significant amounts of a variety of minerals that promote your health."

Honey is normally my sweetener of choice when molasses will be too strong. I've grown to love the dimension it adds and I generally find a little goes a long way. I try to find minimally processed honey as I think most of what is sold in stores has been processed to death and any health benefit it has been lost. I still use store bought but I try to pick up different honey varieties when I'm at farmers markets and natural food stores.

Maple syrup is also another option I tend to forget about as I'm not the biggest maple fan. I don't hate it but I'm not nuts about it either. However, it can add and interesting taste and sweetness to particular desserts and baked goods just like molasses and honey. I will only buy 100% pure maple syrup as everything else sold in stores is really flavored corn syrup.

You'll notice I didn't even touch the artificial stuff in this post. I'm not ant-artificial. I actually have a bag of splenda in my pantry as I write this. Then again, it's been in there for 3 years so that may give you insight into how much I actually use it. Honestly, once I had kids (I can say kidS now, can't I?) I decided to limit artificial stuff more and more. I'd rather my little man have real sugar then splenda any day. He's not watching his figure or reducing his calories and I pay attention to how much he's getting so we don't go overboard.

There is also the stevia option now which I'd prefer to use over splenda, aspertame and saccharine but if I can sweeten with honey, molasses or maple syrup I'd rather go that route. It's just a personal preference and it helps me have fun and get creative in the kitchen. In a weird way I look at sugar and splenda as taking the easy way out. I'm strange, I know. 😉