I've been exited to share this idea with you all week because, of course, my family was unimpressed. Ugh. Sometimes they are so infuriating. This dish came out amazing! I'm serious, I loved every bite, and it was fun. Such an easy way to spruce up a boring pork loin.

See, here's the problem. I bore EASILY. I love trying new things ALL the time and rarely eat the same dish twice.I guess that's why I love to blog about food -- it gives me an outlet to explore new tastes and get creative. Unfortunately, I married my complete opposite. The Husband really has zero interest in ever trying something new. He's, the kind of guy who orders the same thing at every restaurant every time. He'd be happy with a burger or mac and cheese or wings pretty much every day for the rest of his life.

And I fear the 8-year-old takes more after him despite my best efforts. His response when I served this was, "It's good except for that stuffing part. I would have liked it without that much better." 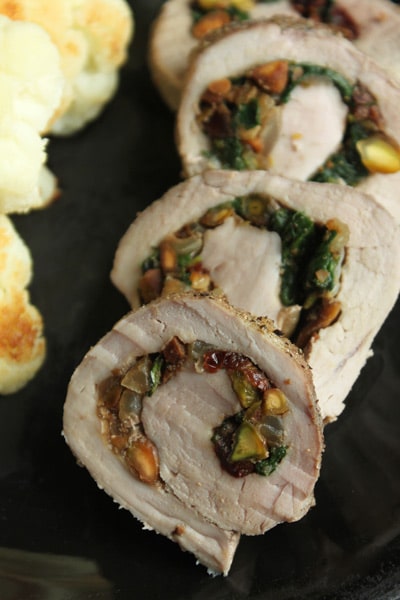 So I'm here to share this with you in hopes someone gets as excited as I was. The pistachio-cherry stuffing added something special to an otherwise boring meal. It could have used a little drizzle of sauce but it wasn't necessary. Those cherries pack a lot of flavor!

Pull out all your ingredients. 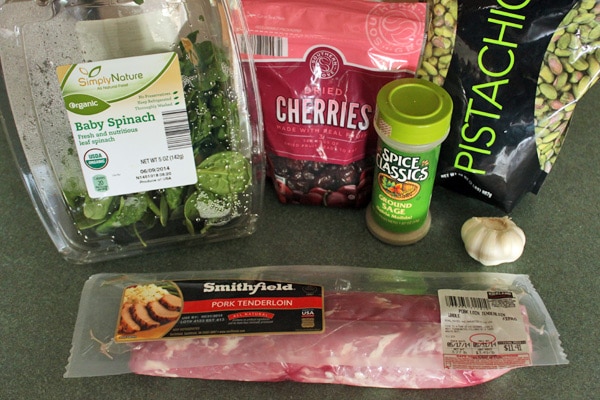 I'm trying to make an effort to do this more. I tend to fly through my kitchen like a tornado. This helps me get organized before I try a new idea. Notice I forgot the onion. It was one of those things I realized later would be a good addition.

First, prepare the pork loin. I was super disappointed that my package had 2 smaller ones instead of a larger one but decided to go with it.

These were so small I just kind of cut them down the middle and butterflied them. 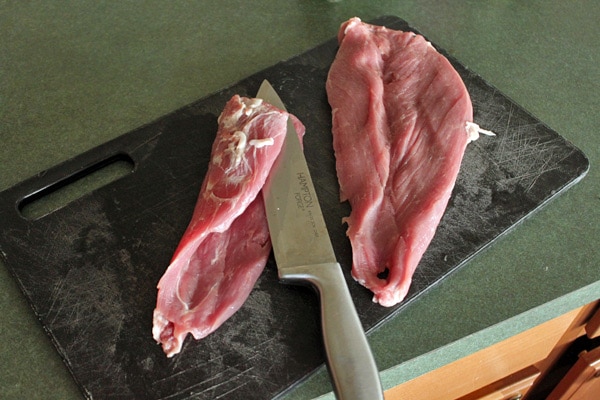 Once cut, place plastic wrap on top and bang a little thinner to even them out some. 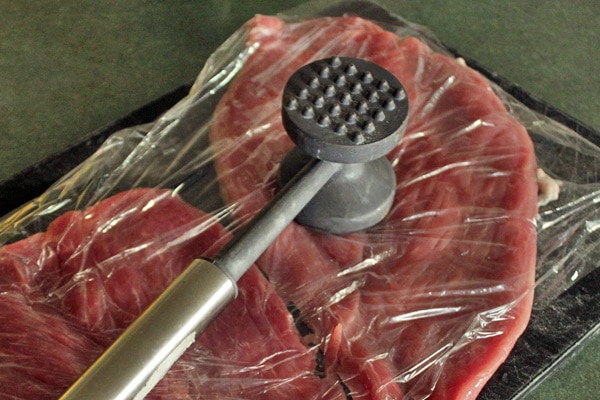 Heat the oil in a skillet over medium-high heat. Add the onion and garlic. 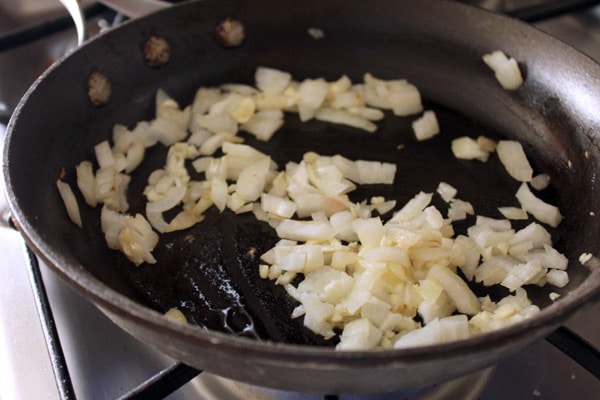 Add the pistachios and cherries. 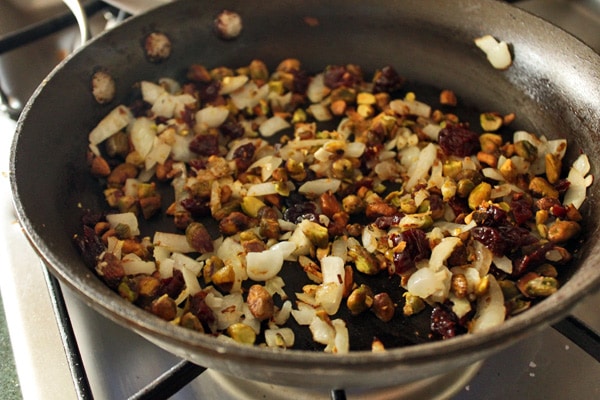 Cook for a minute or two before adding the spinach and sage. 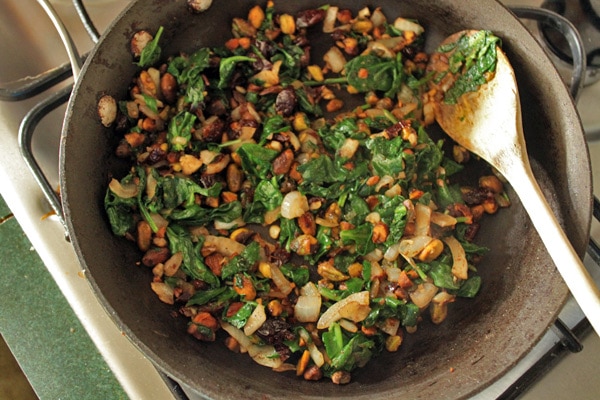 Cook until the spinach wilts down and all the flavors have a chance to merge.

Top the pork loin with the stuffing. 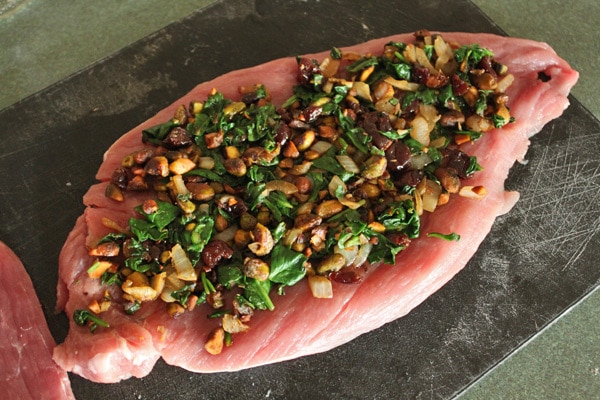 Roll tightly and secure with a toothpick or 2. 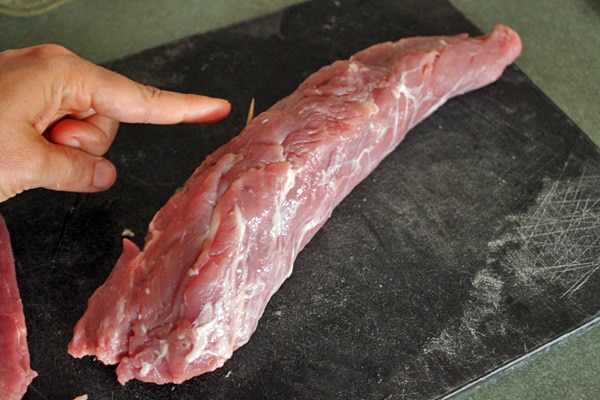 Repeat with second loin if you have one.

Place the pork in a baking dish and sprinkle with a little kosher salt, pepper and sage. 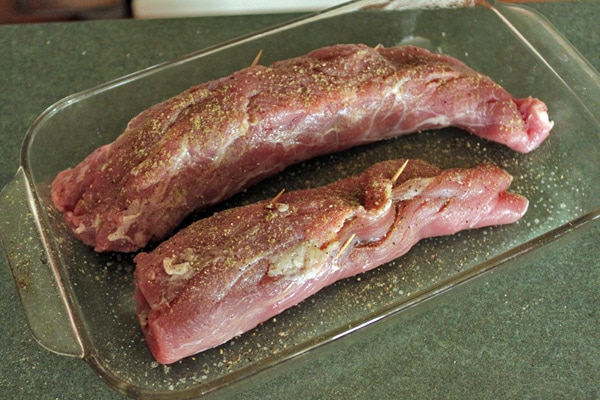 Bake until the internal temperature reaches at least 145 degrees and then let it rest for at least 5 minutes (this is to finish off cooking and help it hold together).

Slice thick and marvel at your yummy creation! (Lord knows the kids won't. 😉 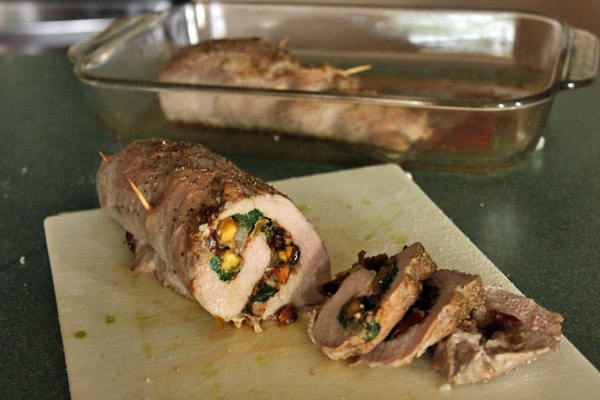 I served it with a big side of roasted cauliflower.

They may not have gone gaga over my awesome (if I don't say so myself) dinner but I love these 3 to pieces!