Have I confessed my obsession with non-bread breading?

OK …  I'm obsessed with breading things in anything other than bread.

It's not that I have anything against traditional breadcrumbs, I just find them boring. Plus, why not have a little fun coating things in options that offer some additional nutritional value?

Come to think of it, my stance on breading is similar to my stance on baking. Anyone can follow a tried-and-true brownie recipe. There are millions and millions of them out there. I'd much rather experiment with my own and create a yummy brownie with some nutritional value because it's challenging and fun! Not to mention, I feel really, really good when my kids eat more balanced at home so I don't have to be a czar when they are out.

Anyway, this is turning into a pretty long introduction considering I still need to tell you what teff is! 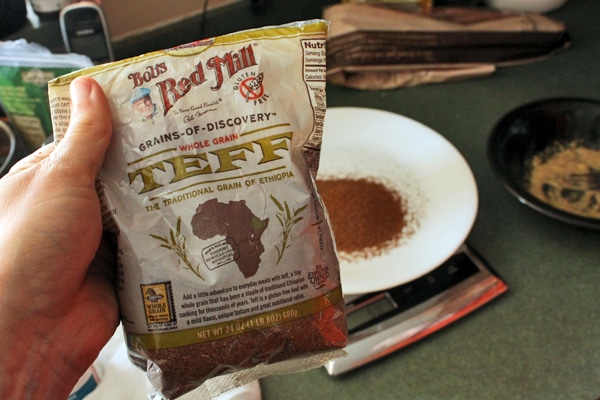 I would have never bought it in a million years considering it wasn't even on my radar until "Bob" sent me some last year. It's a super tiny grain and according to the Whole Grains Council.

Teff leads all the grains – by a wide margin – in its calcium content, with a cup of cooked teff offering 123 mg, about the same amount of calcium as in a half-cup of cooked spinach. It’s also an excellent source of vitamin C, a nutrient not commonly found in grains.

Teff is…  high in resistant starch, a newly-discovered type of dietary fiber that can benefit blood-sugar management, weight control, and colon health. It’s estimated that 20% to 40% of the carbohydrates in teff are resistant starch. A gluten-free grain with a mild flavor, teff is a healthy and versatile ingredient for many gluten-free products.

Since teff’s bran and germ make up a large percentage of the tiny grain, and it’s too small to process, teff is always eaten in its whole form. It’s been estimated that Ethiopians get about two-thirds of their dietary protein from teff.  Many of Ethiopia’s famed long-distance runners attribute their energy and health to teff.

Why isn't this stuff more popular? It's easy to grow, fast to sprout and cooks in moments.

When I first saw and felt it I thought "breading" because it's so small. I experimented a few times using it as a coating when shallow frying and the family didn't seem to notice. So I decided to take the leap and bake some chicken nuggets with it.

I thought the results were FABULOUS! The flavor was great and although the texture wasn't crunchy as expected, the tiny seeds added a fun twist, in my opinion anyway. The kids didn't quite agree. 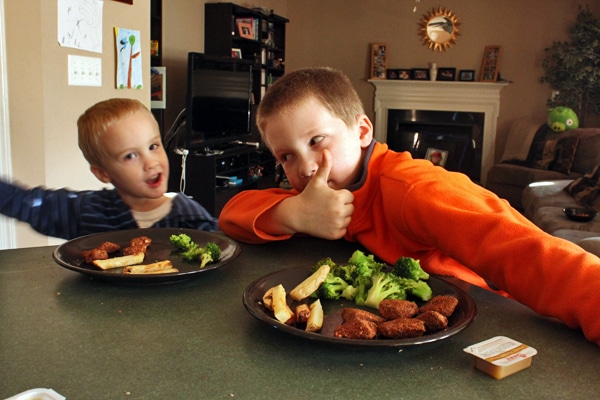 Oh, they both ate it without much argument but I think the 8-year-old's exact quote was.

I just don't think the texture was what they expected and I really can't blame them. That being said I could have eaten the whole darn batch! Even The Husband enjoyed them. 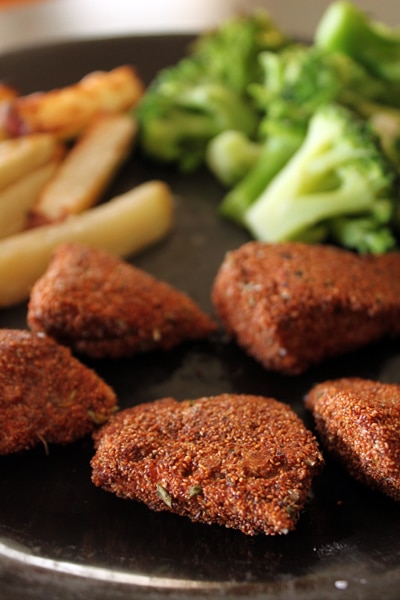 I'm going to share what I did in hopes it gives you a few ideas. Next time, however, I may mix in a little traditional breadcrumbs or oats or panko or something.

Cut the chicken and set aside.

Mix the olive oil and mustard in a bowl. 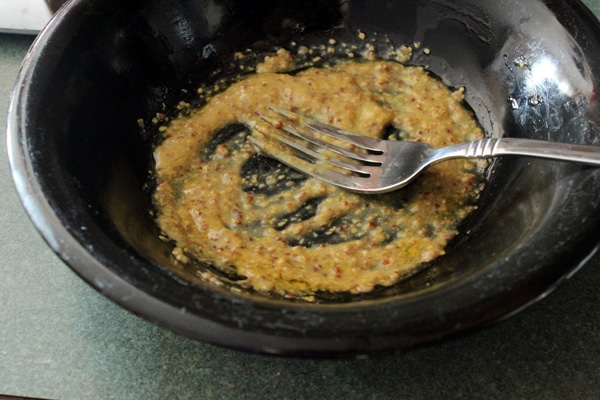 This is my replacement for egg and adds a ton of flavor, too. If you like spicy, a dash or two of hot sauce is an awesome addition!

Add the cut chicken and coat it in the mustard. Set aside. 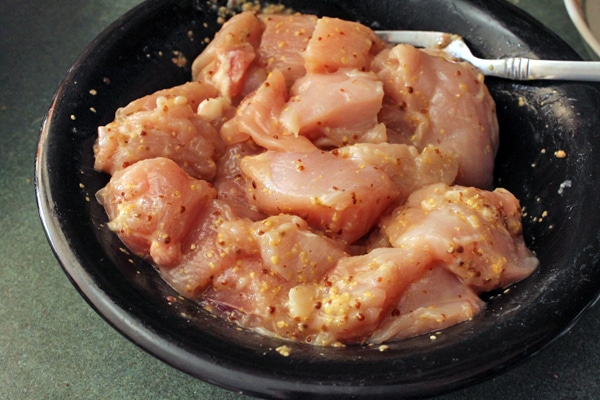 On a plate combine the teff and spices. 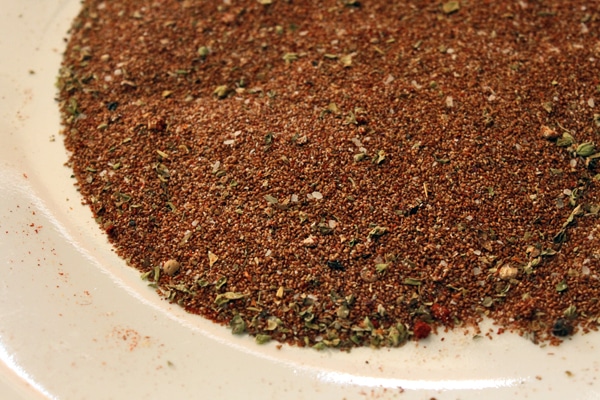 Coat the chicken in the teff breading and arrange on the cookie sheet. 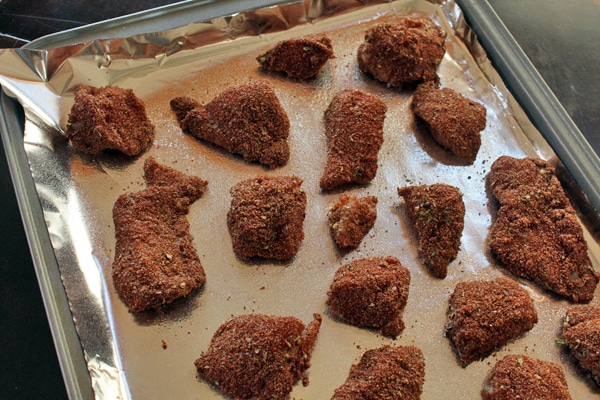 Bake for about 13-15 minutes, turning once during cooking.

I pulled mine out while the boys colored dinosaurs. 🙂 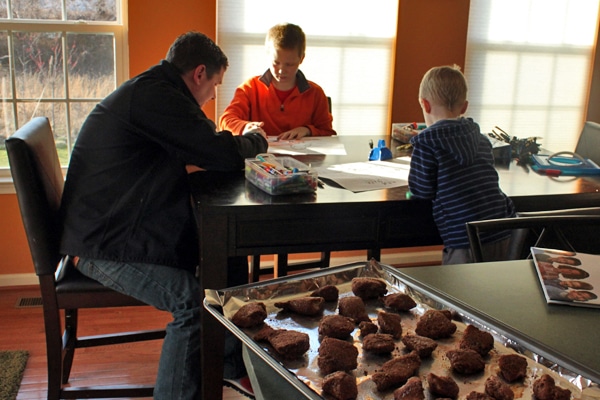 Let them rest a minute and then test for doneness by breaking the largest nugget in half. 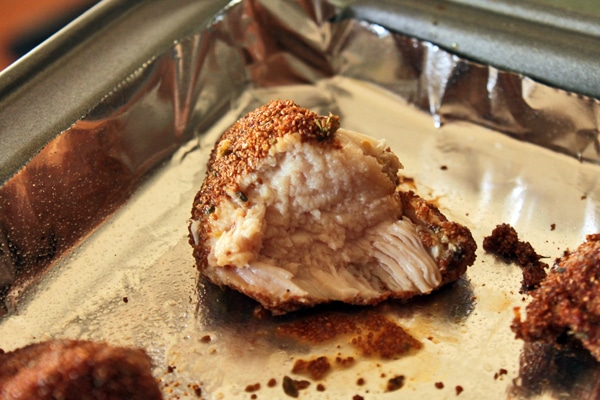 I served mine with a side of broccoli and oven-roasted french fries -- click here for the recipe. 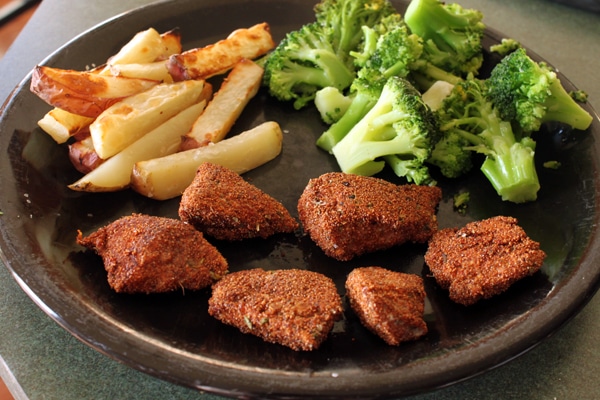 The boys waited patiently while I photographed before dinner. 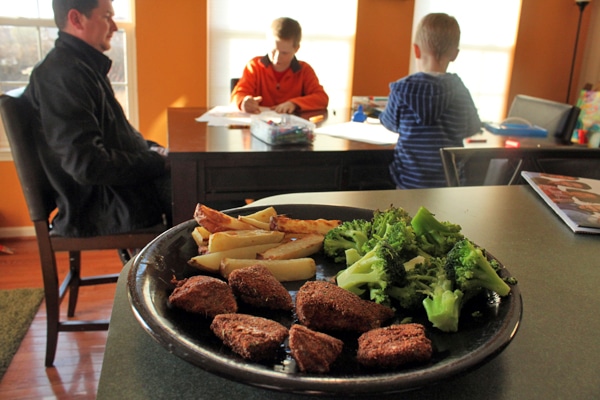 It was a great meal all around and I love that my family is getting used to my crazy dinner adventures.