Watch me fumble through my first frittata. Yes, my first!

Just in case you are like me, a frittata newbie, let me explain what a frittata is. Basically, it's an Italian style omelet cooked in the oven with the fillings mixed into the egg. I believe most "normal" people use cheese, meats and veggies. I stuck only with veggies. First of all, I really don't like cheese and egg together (I know, I'm a freak) and both cheese and egg tend to add extra fat and calories and I don't really need with all the holiday meals coming. That being said, I think some lean ham and a sprinkle of Parmesan would be delicious in this!

I'm going to warn you now, my frittata doesn't come out perfect. I totally under cooked the inside and messed up BUT after I shut off the video and popped it in the warm oven for about 10 more minutes (no broiler) it made a fabulous breakfast!

Here is picture of the finished frittata after an additional 10 minutes in the heated oven. 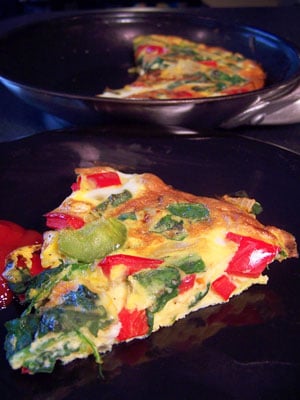 It really did come out delicious! Although, the toddler wasn't too impressed. I'm not sure he’s ready for large chunks in his eggs yet. He likes his simple cheese egg omelets much better. Oh well, more for me!

I hope this horrendous attempt at cooking a frittata inspires you to try something new in the kitchen. Sometimes I really don’t know what I’m doing (ok, MOST of the time). The fun for me comes from trying! You just never know, you may end up with an awesome meal on your hands!

I thought I post the Approximate Nutritional Information for the one I made in the video (the one pictured). It was small but definitely enough for two people, so I'm counting half as a serving.

Now remember if you want to reduce the fat, replace 2 of whole eggs with 3-4 egg whites. That would knock the fat down in half!

P.S. The reason you have 2 videos is because after I edited the two together I realized that I successfully blabbed enough and overshot the 10 minute limit on youtube! Yes, yes I know I'm a chatter mouth!