This recipe was inspired by two things. 1.) The North Carolina Sweet Potato Commission reached out asking me to help spread the word on how AWESOME sweet potatoes are. I agree, so this was an easy assignment. And 2.) All the chatter on my Simple Sweet Potato Hash recipe about sweet potato soup. Something I never had before.

I got the basic idea for the recipe for the soup from the Commission's materials but made it my own, of course. The original recipe called for cooking the potatoes in the microwave and then scooping out the flesh from the skin. I happen to LOVE the skin and I have a no peel philosophy. I try NOT to peel anything if I don't absolutely have to. Why? Well, I'm lazy, but I also happen to think there are nutrients in the skin that we normally discard. Plus I like the texture the skin adds, especially in this soup. 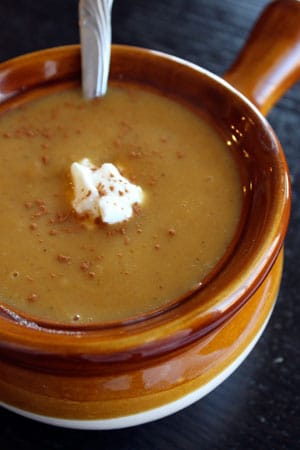 I used some super spicy Madras Curry in the recipe which gave the soup great flavor, but unfortunately made it too spicy for Little Man. I'll be enjoying all 6 servings alone on this one, as the husband just isn't into soup unless it's canned chicken noodle. Again, DON'T get me started. 😉 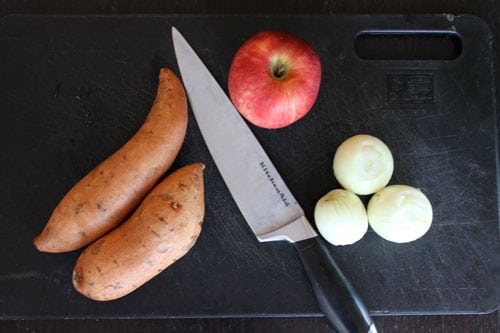 Cut the sweet potato and cored apple into small cubes and loose chop the onion. 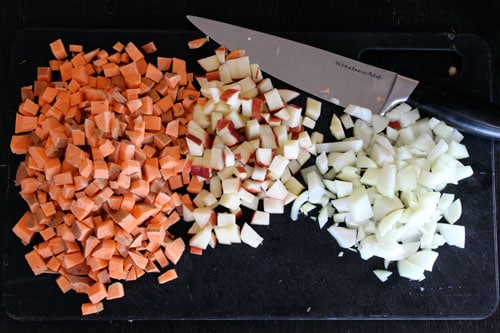 Heat the oil in a large pot and sauté the onion until browning. Add the cubed sweet potatoes and apple with a pinch of kosher salt and the curry. The pan will be pretty crowded but that's ok. Cook until some of the potatoes and apple scorch on the bottom and toss about every 30 seconds or so. The pan will start to get dry. No worries, we are about to deglaze with the broth.

Add the 4 cups of broth and bring to a boil. Allow any little helpers to get a stir in. (We talked about what it smelled like and agreed with "fall". 🙂 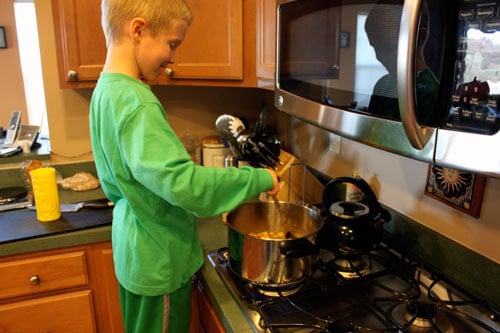 Cover and lower to a simmer for 20-30 minutes until the potatoes are soft.

Once the potatoes are done, puree the soup. IF I had a hand blender that would have been great, but I don't so I transferred mine in two batches to the blender. 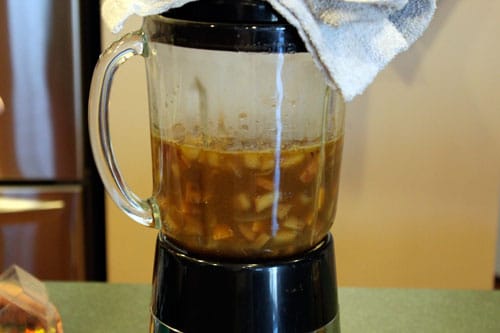 You're done! You could return to the pot to simmer, but I ate a serving, or more like 2, right then by adding a simple dollop of greek yogurt and a sprinkle of cinnamon. 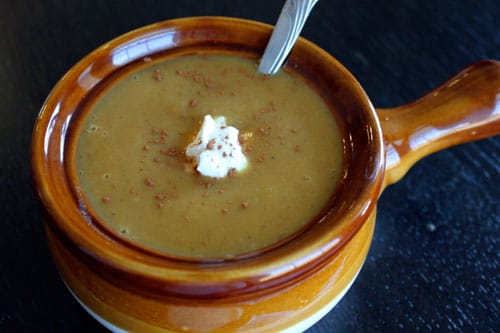 Little Man did try it... 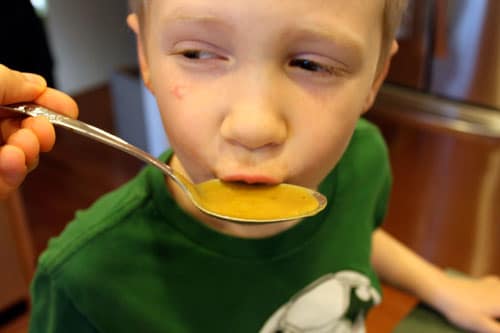 ... but he immediately grabbed his throat and said "Water, water!" LOL the curry was just NOT what he expected. Next time I'll use a milder one. 🙂

I got 6 cups of soup out of my batch, but I'm sure that will vary based on the size of your potatoes.