Did I just say that? I did. What can I say? I love cabbage! I never bought a head unless I was making stuffed cabbage which was very rare. Then I started getting small heads in my farm share and I made my first cabbage salad. I fell in LOVE and make it all the time. But it's fall and the salad is a bit summery so I experimented with soup and again.. IN LOVE! I found yet another new way to eat one of my new favorite veggies.

Then yesterday I stumbled across this recipe for the World’s Best Braised Cabbage. Braised cabbage? Never heard of it. I had two small heads from the farm I didn't know what I was going to with, so why not?.

I didn't know how "the boys" would react. Ryan watched me pack everything in the casserole dish so he was aware if what I was making. I noticed when he sees or helps me make dinner it's not a mystery to him so he's more likely to eat it when I remind him what was in it.

The husband actually ate a whole wedge without complaint. He was hesitant but took a bite and made the "oh, that's not as bad as I thought it would be face". Little guy took a bit more convincing. It was the last thing on his plate and I told him he needed to at least take a bite. He put up a small fight and then just did it (he's learning it's not worth the fight). Well before I knew it, the whole wedge (I had it cut up) was gone. It made smile. 🙂 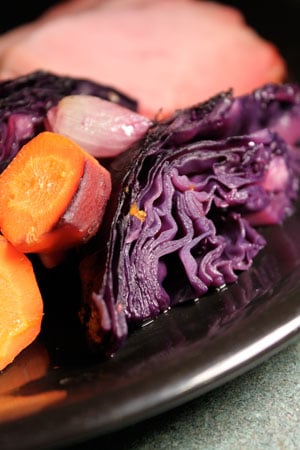 Preheat the oven to 375 degrees.

Cut the cabbage in wedges removing the stem in each wedge. Depending on the size of your cabbage head you should get at least 8 wedges. You don't want them too thick.

Lay the wedges in a casserole dish in a single layer. Top with the chopped carrots and onion. It should look like this... 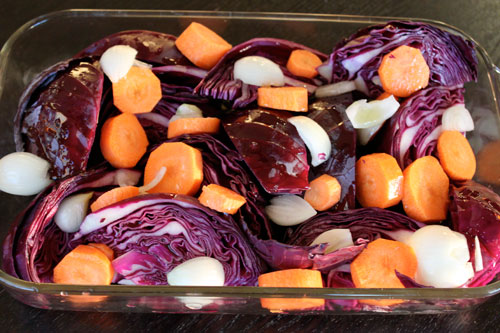 Drizzle the broth and olive oil on top and sprinkle with a healthy dose of salt and pepper (according to taste of course).

Cover the dish tight with aluminum foil. And place in the oven for 1 hour.

Here's a little before... 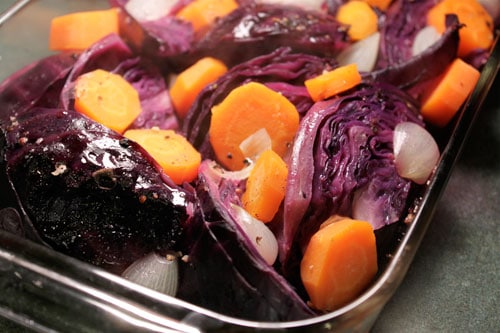 I didn't even check mine. I just popped it and and had fun playing Candyland

After the hour, remove from the oven and uncover. Turn the oven up to 425 degrees.

Return the cabbage to the oven and cook uncovered for 15 minutes.

I served with a simple baked ham and some brown rice. I wanted to put the ham in the dish but mine wasn't big enough. The ham went wonderfully with the cababage and I would take a bite of the two together. I think cooking them together would even be better.

I'm calculating the nutritional information based on 8 servings which would be 1-2 wedges per person based on how you cut them. But honestly, you don't really have to worry about calories in a side dish like this. A 2 lb head is only 300 calories. You really can't overeat cabbage! 🙂