Sometimes I feel like my cooking talents are wasted on my family. Other times, when I'm not so self-confident, I assume I must just be a bad cook.

How awesome would it be if they not only liked what I cooked but appreciated how I can pretty much whip together a good meal with whatever we happen to have in the fridge? I mean, they can't do it.

Then I realize they don't want to do it. It's just easier for them to go out, order in, or just snack their way through meals.

GAH! It's infuriating. I can only hope my influence will take over and pay off when the kids grow up.

Speaking of, the 9-Year-Old is now responsible for one meal a week. I'll have to document one of them these days and blog about it. He seems to be embracing it and we've been having fun meal planning together.

Today I'm popping in to share this quick pasta dish I pulled together last week with leftover baked ham and frozen peas.

I bought my first bone-in ham from a local farm and I LOVED it. I've already made stock out of the bone and I'm planning to make lentil soup with it once fall sets in.

I've been making an effort to eat more local and trying to be more economical with bone-in cuts. It's fun and I'm learning it really only takes a tiny bit more work and then I'm left with lots of leftovers to make dishes like this.

Whole Wheat Pasta With Peas and Ham was fast, easy and, best of all, delicious! The family's response was pretty much what I expected. The 3-Year-Old just ate because he has "noodles" and really, that's all that matters to him. The 9-Year-Old picked at it and said it was "OK." But I had to convince him to eat the peas and ham left on the bottom of his plate. The Husband who I thought HATED it actually later confessed  he thought it was great BUT my noodles were too al dente. He likes a mushy, traditional pasta -- *eye roll* 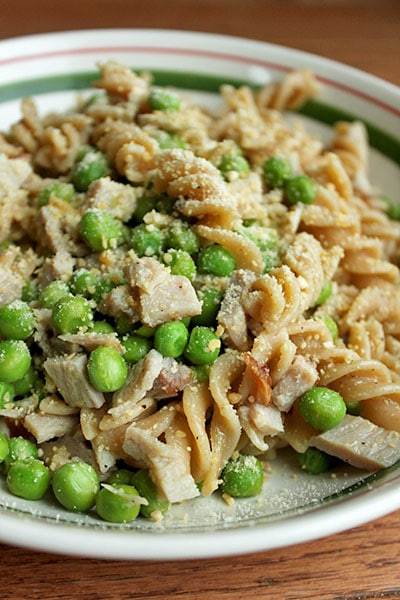 Honestly, he's never been on board with my whole grain pasta but it's really all the kids know. So that's good.

I could have eaten the whole darn batch myself. I love the combo of ham and peas, and the pasta made the dish filling. I rarely eat pasta anymore so it was quite a treat.

Cook the pasta according to the package.

While waiting for the water to boil, whisk the oil, lemon juice, cheese, salt and pepper until well combined. Set aside.

Once the pasta is done (about 12 minute after adding it to the water), add the peas and ham to the pasta while it's still in the boiling water and cook for an additional minute.

Drain the pasta, peas and ham and place them back in the pot. Add the oil-lemon juice mixture and toss until everything is well combined.

Serve and top with an additional sprinkle of Parmesan. 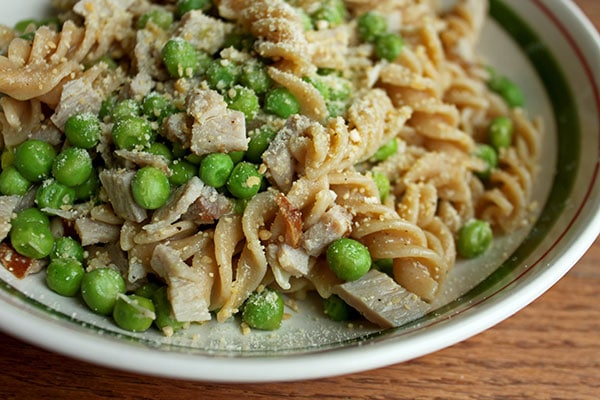 I ended up with 7 cups of pasta so I'm counting this as 4 servings -- each one about 1 ¾ cups. It was a good size and filling!