I've been making these things for weeks now and I can't remember what inspired me the first time around. I think it was because I wanted to make banana pancakes but I didn't have any bananas. I glanced over at our Halloween pumpkins and der.... why haven't I thought of this before?!?

The kid is a HUGE fan. He likes to dip them in a maple/pumpkin sauce I make. I like them straight up and the people at work preferred them with good old fashion maple syrup. I made about 3 dozen to bring for a charity event. A few people went for seconds so I'm assuming they liked them. I realize not everyone is a whole grain nut like me so if they were expecting traditional white fluffy pancakes they were disappointed. These are a bit denser, real moist and tad bit sweet. Just the way I like them! 🙂 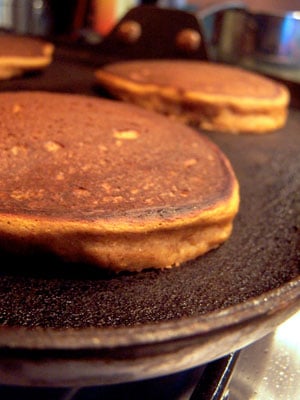 In another bowl add the pumpkin, egg, agave and milk. Whisk until frothy.

Pour batter in a non-stick skillet or griddle over medium heat sprayed with non-stick cooking spray. Cook about 1-2 minutes a side, small bubbles will form but not as many as traditional pancakes. Peak underneath for a light brown color, then flip.