Those that read my weight loss blog may already know this is an older idea. I just never photographed it before.

I really need to thank the toddler for introducing me to oatmeal. Honestly, I never ate it until he came around. Then I realized how great warm breakfast could be!

I “cheat” in this recipe using one of those flavored oatmeal packets. I just haven’t been able to duplicate the same apple pie experience with out it. 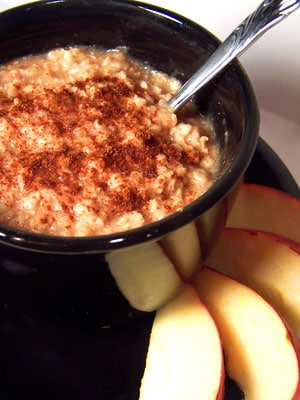 Then again, I really haven’t tried. Sometimes quick and simple is just what you need in the morning, especially with a toddler or two on your hands.

Pour the package contents in a coffee mug with a dash of extra cinnamon and add about ½ cup of boiling water. Stir and let sit a minute.

Stir in the applesauce and sprinkle with a bit more cinnamon.

I swear it taste like I smooshed up an apple pie!