WAAAAY back when, I posted Apple Pie Oatmeal. The idea pre-dates GreenLiteBites as it was originally posted on Roni's Weigh (which at the time was Weight Watchen--Holy crap I've been blogging for awhile!) Anyway, I had a craving for the original Apple Pie Oatmeal but since I no longer buy the flavored packets of oatmeal I had to recreate it using rolled oats.

I think this version is actually better. It has less ingredients (compared to the packet), it's cheaper (you can now use the oatmeal in bulk,) it's not as sweet and I just love being independent of products. 🙂

As you can see the toddler loved it and he's in rare form in the video. He's becoming VERY vocally expressive. Not that he wasn't always but he just seems to have so much more to say these last few weeks. I tried to keep it short but you'll see, he tends to distract me a bit. If you do decide to watch it you'll have to stay to the end, he does another one of his secret taste tests again (like he did with the tabasco in the the Tortilla Soup Video-A YEAR ago!)

Scroll below the video for the recipe. 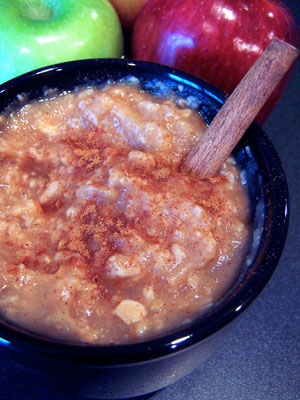 Put the oats, water, sweetener and cinnamon in a small pot over medium high heat. Cook and stir until water is absorbed. About 5 minutes.

Mix the cooked oatmeal with applesauce.

Sprinkle a bit more cinnamon on top for effect.