Not being afraid of fat is new territory for me. If Whole30 has taught me anything it's how easy I can pull together tasty meals with a handful of simple ingredients. One of those ingredients is usually a fat in some form (oil, bacon, avocado) and normally that would scare me but what I'm learning is a little goes a long way. My food/cooking is becoming easier, tastier and more satisfying.

This meal is the perfect example. Chicken simply crusted in almond flour and spices served over warm brussels sprouts with bacon -- easy, tasty and satisfying! 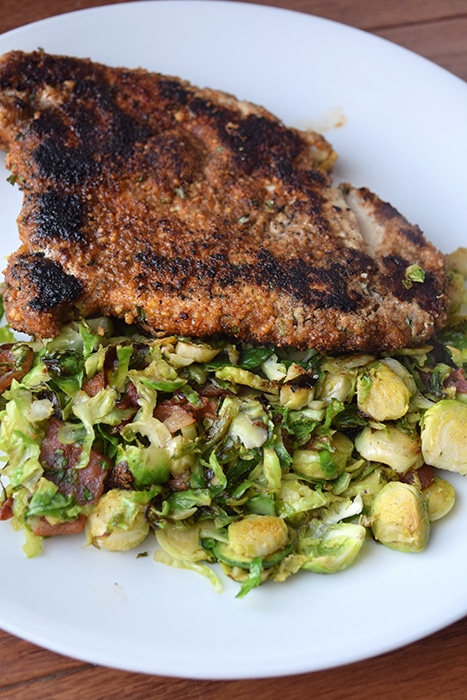 Cut the ends off the brussels sprouts and run a knife through them to shred. Set aside.

Place the chicken breasts between two pieces of plastic wrap and pound to about ¼ of inch thick.

Whisk the egg in a shallow bowl to create an egg wash.

Heat the coconut oil a large skillet over medium-high.

Dip the chicken into the egg wash, then coat in the almond flour mixture. Add it to the skillet. Mine were so big once flattened I had to cook them one at a time.

Since they are pounded thin they will only take a couple of minutes per side. Just cook until firm and no longer pink in the middle.

While the chicken is cooking, cut up the bacon and add it to a large nonstick skillet. Cook over medium heat until it begins to render and crisp up.

Add the brussels sprouts to the skillet with the bacon and toss with a pinch of salt.  Cook for a few minutes until warmed through.

Serve half the brussels sprouts with one of the breasts. 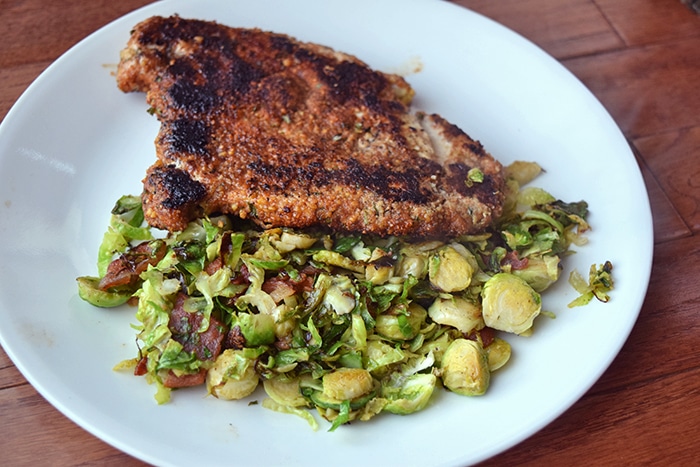