I finally did it! I've been kicking around zucchini bread ideas for some time and after a few experiments I'm ready to post.

The idea is a modified version of a recipe my mom uses from an old cookbook. It intrigued me with it's use of crushed pineapple as a sweetener. Although the original recipe called for white flour, 2 cups of sugar, and a cup of oil, all of which I think are uncalled for.

My version is far less sweet as I ditch the sugar and use a combination of honey and molasses to add more flavor with just a touch of sweetness. It's apparently enough as the toddle DEVOURS this bread. He also LOVED helping me make all the experiments. Just look at my little sous chef! 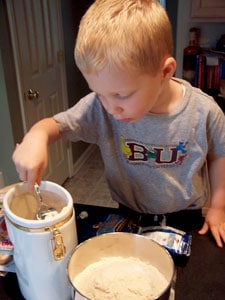 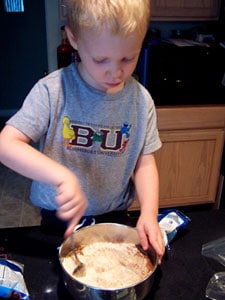 I brought a loaf to work where it was well received and a few friends at the gym seemed to like it. Although I never trust face to face reviews as I know it's hard to tell someone you don't like what they made in person.

OK, can you tell I'm nervous about this one. :~) I think the more I work on a recipe the more I'm worried how you guys like it. It's a labor of love I suppose. 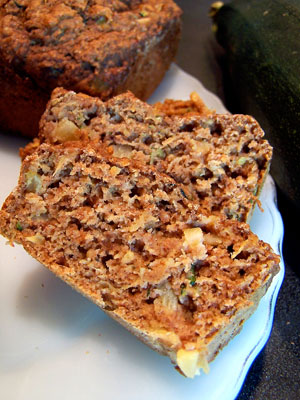 Preheat the oven to 350 degrees.

Open the can of pineapple and place in a metal strainer in the sink to remove some of the juice while preparing the rest of the ingredients.

In large bowl, beat the eggs until frothy. Add the applesauce, honey, molasses, vanilla and beat until foamy and then beat some more. :~)

Ground the walnuts in a blender or food processor. Don't over process the oil in them will start to stick.

Stir the shredded zucchini and drained pineapple into the egg mixture.

Add the dry ingredient to the wet and stir until just blended.

The batter makes 2 large loafs or 6 mini loaves. You can even make 1 large and 3 small or 24 muffins (note: haven't tried the muffins YET!)

What ever you decide be sure to spray with non-stick cooking spray and dust with a bit of flour.

Bake the large loaves for about an hour, small loaves for around 40 minutes. Muffins probably half that (I'll update when I do it). A toothpick inserted should come out clean when it's done.

Here's the batch I made this morning and I just had to show you our mess of a kitchen when we were done. I may be the messiest cook EVER! (well I did have help) :~) 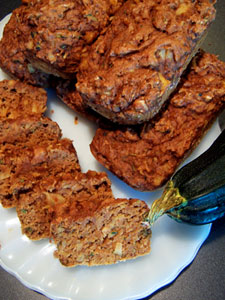 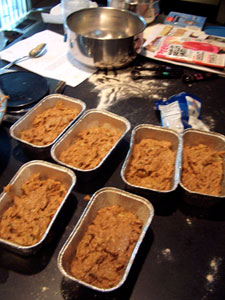