I came up with this idea a while back when researching what foods aid in reducing swelling. I discovered that pineapple contains an enzyme called Bromelain which is an anti-inflammatory agent. People believe that it can aid in everything from asthma to cellulite. I'm not going to hop on the alternative medicine soapbox here (as I'm not an expert and don't claim to be) but I do believe food should be our first source for nutrients. I think we jump to "pills" before looking at our diet. So instead of buying Bromelain supplements I researched a bit and found that a majority of Bromelain is found in the core of a pineapple.

I always knew the pineapple core was editable but it's way to hard/chewy for me. I always just threw it away. Which I was never a fan of doing because it seemed like such a waste. It just never occured to me to think of a way to use it until reading about the Bromelain.

Alright this is becoming a very wordy introduction to a very simple idea. Instead of ditching the pineapple core of your next fresh pineapple try this idea to make it into a simple tasty smoothie! The core has an awesome pineapple flavor and a thick almost gritty texture when blended. 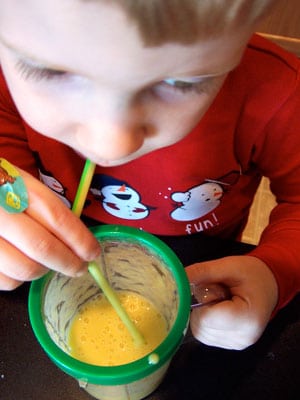 You don't buy fresh pineapple cause you don't know how to cut it, you say. Ahhh I have a video for you! ;~P

Here's what the toddler and I did this morning. As you can see.. he liked it! 🙂

Separate the orange into sections and pulverize in the blender alone. This will give you a liquid base.

Slice the pineapple core to help it blend easier. 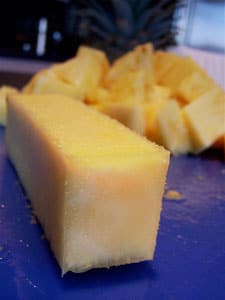 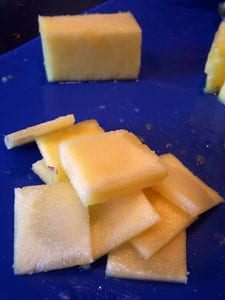 Add the banana and pineapple core to the blender . Blend until smooth. Add the ice cubes and blend again.

Here's the toddler waiting patiently and then enjoying (my favorite picture of all time!) 🙂 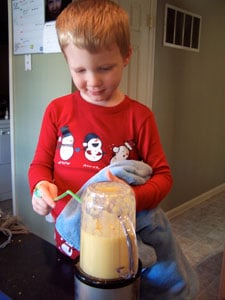 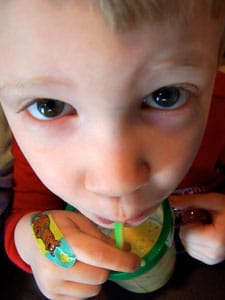