My mom is going to laugh at me yet again. We've been having conversation about getting older and losing our minds. She's famous for buying gifts, forgetting and then finding them stashed all over the house. I laugh now but I'm bound to do it myself. Actually I have no doubt I will. Case in point the horde of baking potatoes I now have in my possession.

See I generally only keep 1-2 baking potatoes on hand for the husband as a quick side dish when I know he won't like what I'm making (for example sweet potatoes, quinoa, bulgar, couscous - that's right he won't eat any of those.) I'll simply bake a potato and he's happy. Actually besides mashed it's the only other way he'll eat potatoes. Boy, now that I think about it, he IS freakin' picky. But I digress.

Anyway, I must have planned on making mashed a couple of weeks ago so I picked up a few extra. Then I forgot I did and picked up a 5lb bag this past week because they were on sale. Now I have a gross of white potatoes on my hands. So what do I do? Make home fries out of potatoes of course! (that was suppose to be a play on 'make lemonade out of lemons' but I don't think it worked too well. lol) 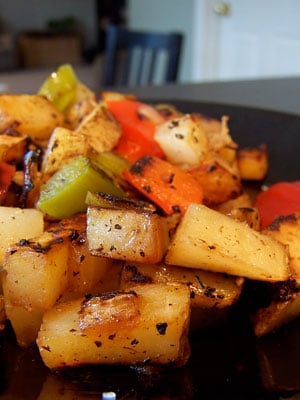 Heat a non-stick skillet over medium-high heat. Add the oil, onion then pepper. Cook for a few minutes while you cube the potato. Add the potato. Liberally sprinkle with kosher salt and a bit of pepper. Cover.

Now. LEAVE IT ALONE for 3 minutes. Sorry, didn't mean to scream but this is the key. We want to just about burn the side that's down. After 3 minutes toss and assess the burnt-ness. If is too black then you may want to lower to medium. I kept the heat at medium-high but I was going for the scorched look. Re-cover and leave alone for another 3 minutes.

After the second three minutes, toss again and give a potato a try. It should be getting soft. If you'd like to add more seasoning do so now. Cover and cook for an additional 3 minutes. This should be long enough to cook the cubed potatoes. If it isn't, repeat the process until they are to your liking or simply lower the heat to medium-low and keep the cover on until you are ready to eat. 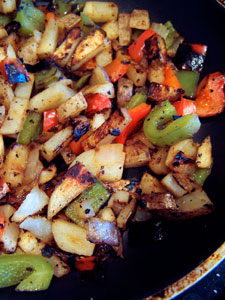 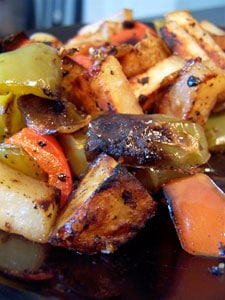 Now, I did used a tsp of olive oil but I also tried the technique with cooking spray and it worked as well. However, to me this is a perfect meal to use a bit of real oil as all the other ingredients are naturally fat free. It's when I'm using meat that I generally skip the added oil. That's just my approach. Either way the nutritional information below is with the tsp of oil.