My gym started a new feature on its website called "Tasty Thursdays" and our new trainer posted a sweet potato casserole idea I just had to make my own -- because, you know, I can't follow a recipe.

Anyway, I've made it twice, once using a package of premade sausage and eggs. The second time I ventured on my own and made homemade ground sausage.  Now there may be no going back. It was just so easy and tasty! And I love that I know, exactly what's in it.

I also decided to skip the whole eggs and used egg whites instead. It was already going to have a fairly high fat count with the sausage, and although I don't think fat is the enemy, I also don't think there's a need to go overboard. Especially when a carton of egg whites is so cheap and accessible.

So needless to say this is one of those recipes to run with. The idea is super simple, it's just layers of sweet potato and sausage held together by egg. I'm the only one in the house that will eat it but that's OK. I make a batch, separate into 6 containers and voila! Grab-and-go breakfast. All it takes is a minute in the microwave to heat up. 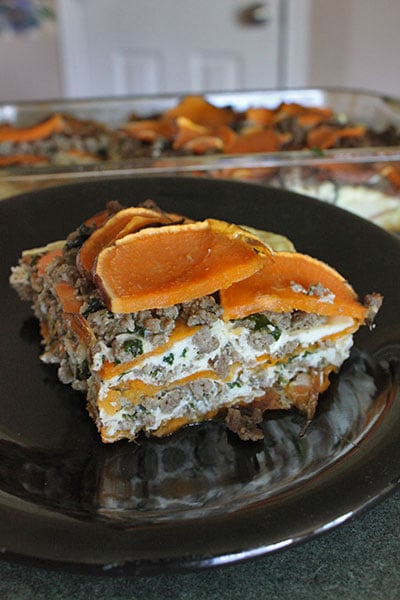 Homemade Sausage (Note: This can be replaced with a 1-pound roll of sage breakfast sausage like Jimmy Dean)

Preheat the oven to 350 degrees.

You do not have to make your own sausage but I found a new local farm that sells ground pork so I figured why not? 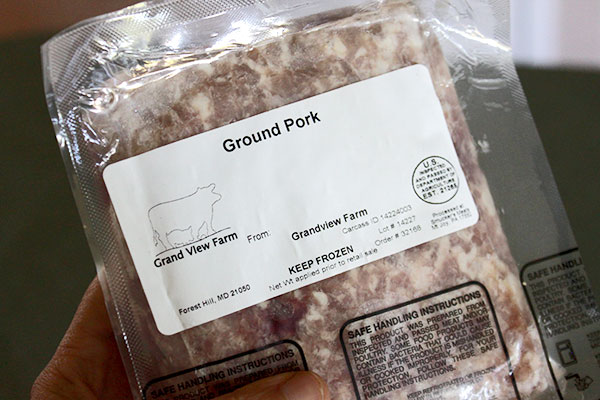 I put the maple syrup, sage, thyme, kosher salt, red pepper, black pepper, nutmeg, and allspice in with the meat and combine. 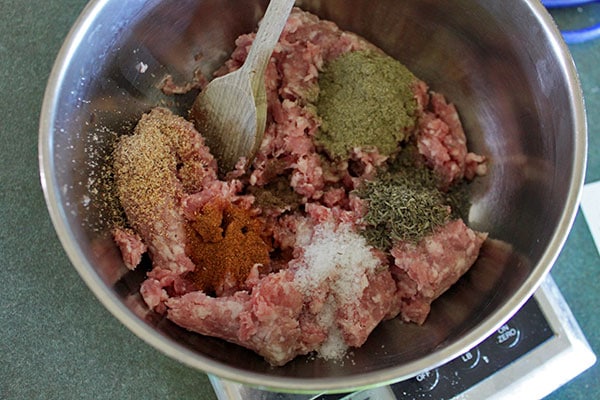 I may make another batch next week and form into patties. That's how much I liked it!

Anyway, once the spices are mixed in, brown sausage in a non-stick skillet.

While the sausage is cooking, slice your sweet potato as thin as you can while still keeping full slices. 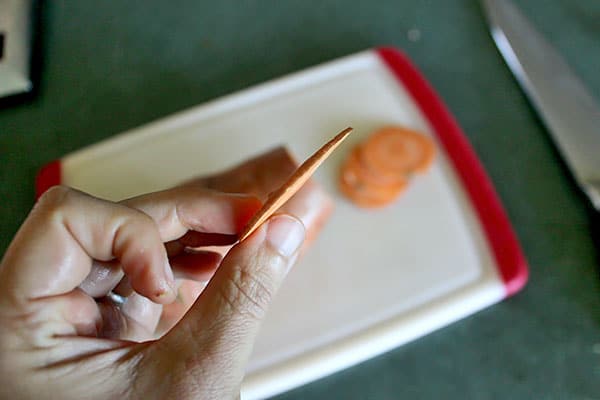 I kept the skin on. It's just how I roll. You can peel if you like.

Once the sausage is browned add the spinach and cook for a minute allowing it to wilt. 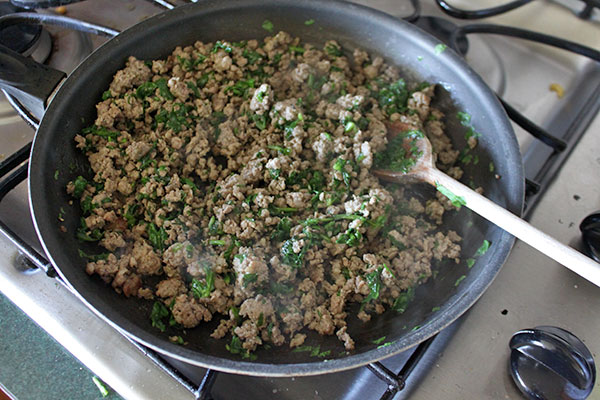 Note: You could use more than 3 cups of spinach. It just happened to be all I had. I think I'll add an entire bag next time.

Remove the sausage from the heat and continue slicing your potato. 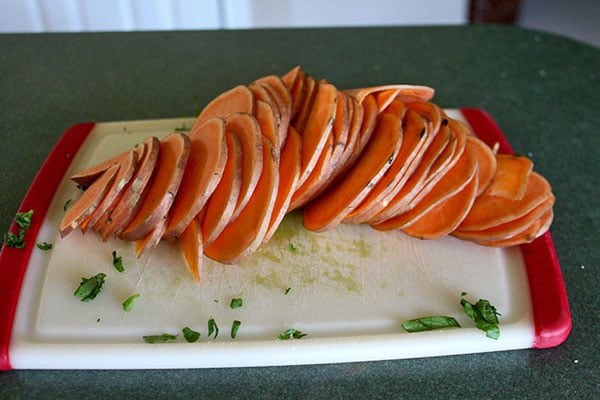 It's time to start the layering.

Place a layer of sliced sweet potatoes on the bottom. 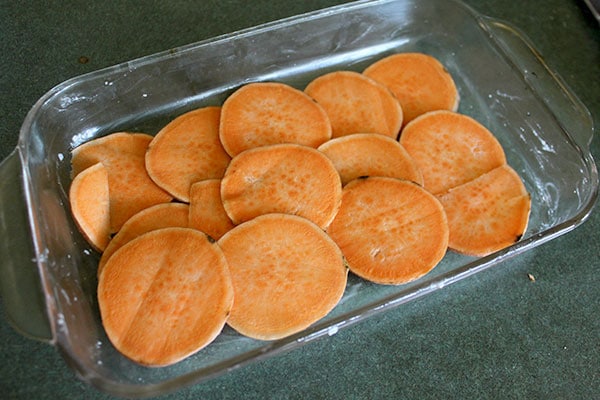 Top with about ⅓ of the sausage and spinach. 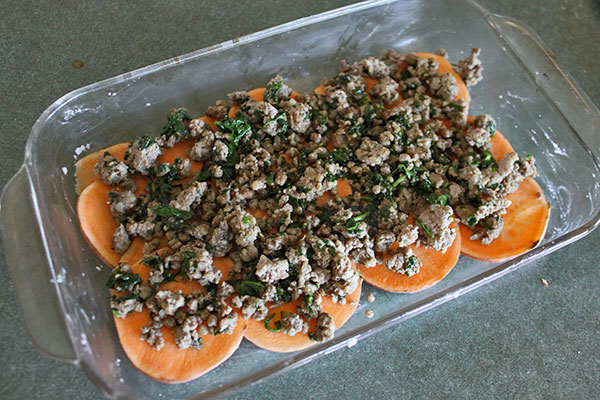 Top with another layer of potato. 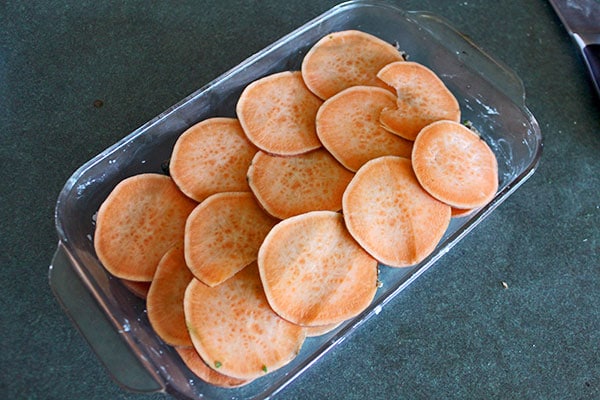 Repeat for 3 layers and top with the remaining potato. 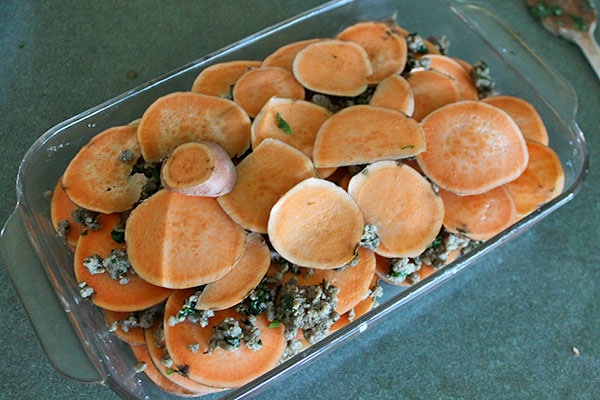 Pour the egg whites on top. 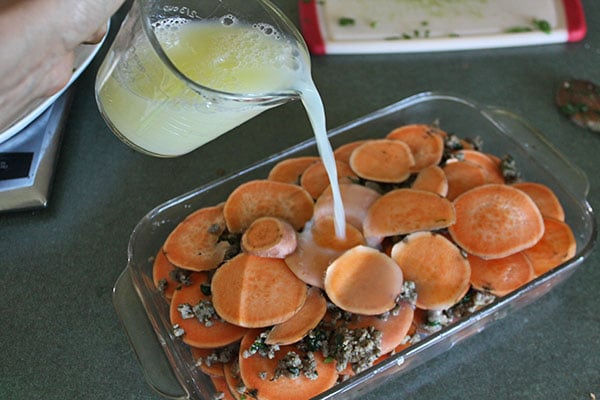 Please learn from my DOUBLE mistake -- the potato will stick to the aluminum foil so spray it with non-stick spray or make sure to tent it so it doesn't touch the top layer.

Remove from oven and let rest for at least 5 minutes. 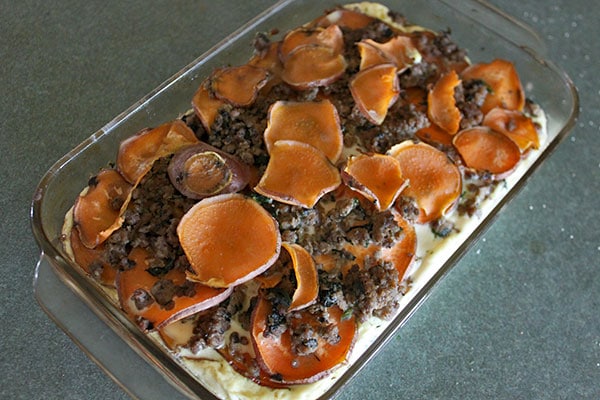 The potato will be cooked through, the sausage will get all nice and crisp on top and the egg holds all this yumminess together. 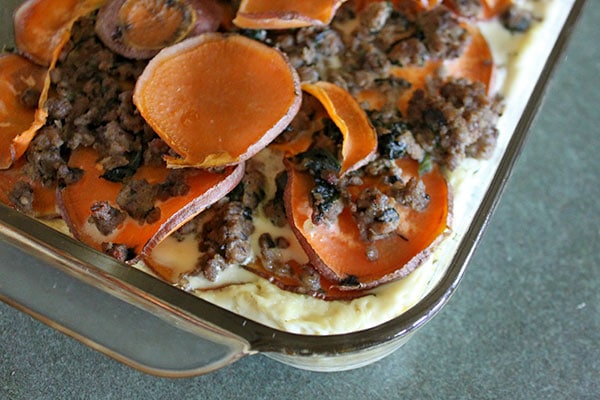 Cut it into 6 even slices and marvel at the layered awesomeness! 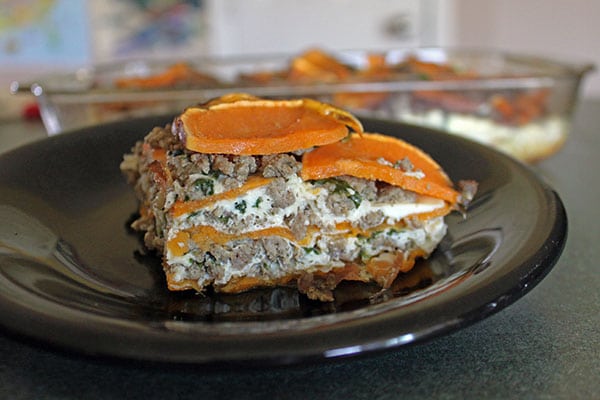 I love when casserole ideas work. I've had many failed attempts. 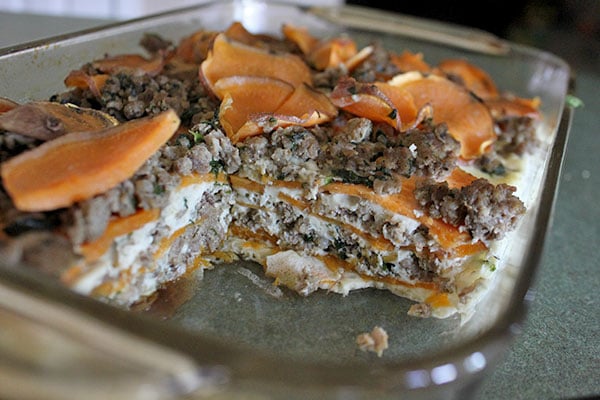 Here's the nutritional information for my complete homemade version with the egg whites. If you decided to use whole eggs it adds about 10 g of fat and 100 calories per serving. Still not too bad!

Note: Thanks to Gail for telling me the proper name for this dish is a strata. Learn something new every day!  🙂