Don't get your hopes up, it's more oatmeal then pie. And since we are in full fledge fall I just had to do something my canned pumpkin. Just HAD to! ;~P

I'm getting more into oatmeal but not the pre-packages flavors. I really want to find ways to make it fun and tasty at home without using a pre-flavored package with all the junk in it. Not that I'm totally against the junk, sometimes that junk makes things tastes good! :~) But I'm making an effort to overall reduce it in our diets and to replace it with homemade goodness where I KNOW what all the ingredients are, kind of like I did for Creamy Berry Oatmeal.

Now, I happen to use a packet of original plain instant oatmeal for this but you can adjust and use the quick cooking stuff found in the big containers. That's cheaper anyway, I just happen to have a packet lying around.

Now yesterday, the toddler tried it, said he liked I but didn't want his own. Today I couldn't get him to go near it. He's hit or miss with oatmeal, it's strange. He's more of a pancake guy. :~) 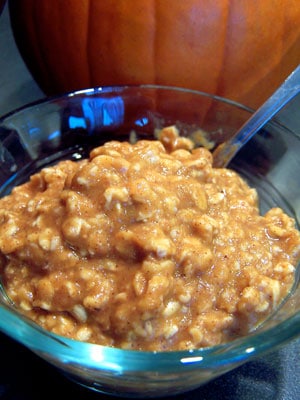 Add boiling water to oatmeal and let it sit while you pull out all the other ingredients, about 2 minutes). If you like it thick like I do, the water should just cover the oats.

Add the pumpkin, sugar, pumpkin pie spice, cinnamon and nutmeg. Stir together! If it's to thick, add a splash of the boiling water. This will bring the temperature back up too.