I don't know WHAT came over me last night. It was 10PM and I "wanted something". So I hit the kitchen with an empty stomach and some inspiration from these pumpkin cookies.

I fear calling mine cookies as they really aren't. I don't like to sugarcoat what I make (literally and figuratively :~P) so I'll simply call these "bites".

They are soft, tasty and very filling! Good for breakfast or as a snack paired with a cup of tea. The husband liked the flavor although I'm not sure he was sold on the texture, this just isn't his thing. The toddler, on the hand, called them cookies and enjoyed every bite! Maybe I'll get him to like these type of "cookies" so much that regular old cookies would be boring to him. LOL One can dare dream, can't they? :~)

I'm going to experiment a few more times with this idea but wanted to share for early feedback! Plus I'd like to hear your experiments! 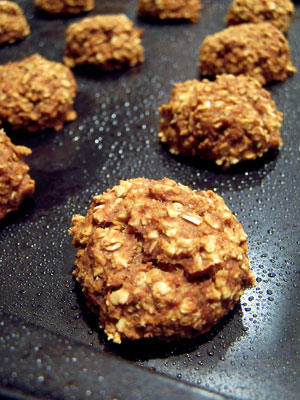 Mix together the pumpkin, sugar, applesauce, and vanilla. Set aside.

In a separate bowl, combine the remaining ingredients, then add to the pumpkin, mixing well.

Drop tablespoon amounts on a cookie sheet sprayed with non-stick cooking spray, should make 47-50 bites. Bake for 15 minutes or until done.