They liked it... They REALLY liked it! I can't believe it. The only complaint came from the toddler was when he informed me he did not like "stuff" on his peppers. How can fault him for preferring raw peppers over cooked. So I took them off his plate (after he tried a bite, of course) and replaced them with uncooked green pepper strips. That's a worthy compromise in my book. Other then that both the husband and toddler's plates were clean.

The best part of this meal was speed. It literally took me 15 minutes to cook. I think I may make it again and record it as the video of the week. It's also fairly mild, which is why I think it was loved by both my boys. I would have preferred a little more pepper but that's ok, I'll comprise for empty dinner plates. 🙂 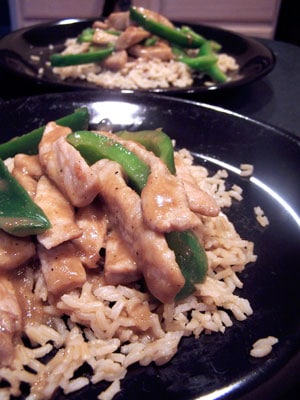 Cut the pork chops in thin slices. Brown the pork in the skillet. It will stick a little bit and that's ok. Let some pork cook for a few minutes before stirring to help prevent too much sticking.

Meanwhile whisk the broth, soy sauce, honey, vinegar, pepper and 1 tbsp of the flour. Once the pork is almost all brown add the broth mixture. Bring to a boil. If the sauce isn't thick enough sprinkle the remaining flour into the pot, it will thicken. Just be sure to stir to remove lumps. Add the sliced peppers, stir, cover and reduce the heat to medium-low. Let cook for 5 minutes to soften the peppers. 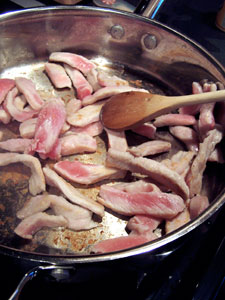 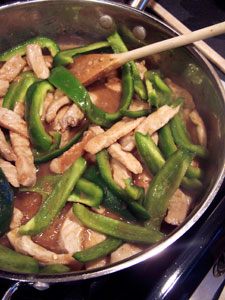 I served over ½ cup brown rice. Although Bulgur would be good too!