I've had a package of steel cut oats (this exact container)

in the pantry forever! And for some reason I've been nervous to try them in spite of the countless recommendations from twitter friends and fellow bloggers.

I decided to try the overnight method and cook the oats in the crockpot, crock pot, slow cooker, whatever you call that thing! I didn't follow any recipes. I just used the water to oats ratio recommendation and added a pinch of salt. 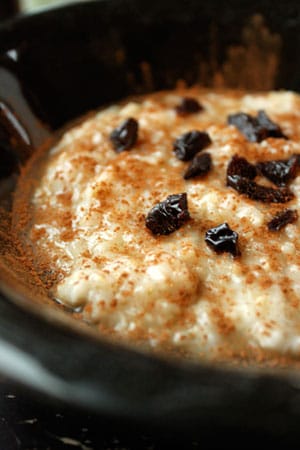 Since this was my first shot at it I decided to keep them favor-less and add different toppings in the morning. This ended up to be a great idea as Little Guy and I could each make our own bowls. More on that later.

My verdict... perfect! When I woke up and peered under the lid I was less than impressed. But a half hour later I was enjoying a delicious warm bowl for breakfast and it was divine! Let me tell you what I did...

Place all ingredients in the slow cooker, stir, cover and cook for 8 hours (overnight) on low.

The next morning you may be an unimpressed as I was. 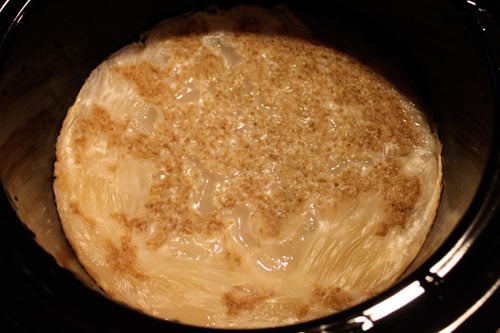 There seemed to be this film over the pot and it definitely stuck to the sides and bottom. It was also kind of soupy. So I shut the slow cooker off, stirred it up and left it uncovered for about 20 minutes while I showered. When I got back the oats seem to have thickened up even more and they looked delicious! It was weird.

We made two different flavors. For Little Guy I added a handful of frozen blueberries, a sprinkle of cinnamon and some raw sugar. 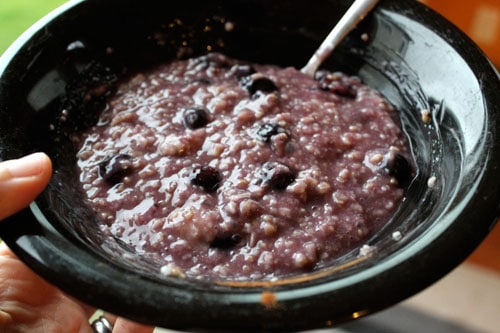 He loved it! And adding the frozen fruit cooled it down perfectly for him.

For me I drizzled honey, sprinkled cinnamon, some diced up dried cherries and kept it nice and hot. 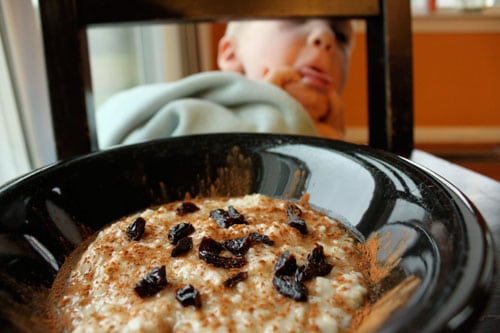 I LOVED it! and he loved making faces while I photographed. 🙂

Overall I think the crockpot/slow cooker steel cut oats were a success. I may even make a big batch next time the family is over and have an oatmeal topping bar style breakfast. That would be fun on Thanksgiving morning when you already have a ton of stuff to cook and prepare but a houseful of guest that still need breakfast. Oh! but I will spray the crock with non-stick.. it's a MESS right now.

I'll put the steel cut nutritional information in below but remember you have to add the toppings if you are counting. My honey, cinnamon and cherries added maybe about 50 calories, if that.

Update:I had two servings leftover and put them in single serve containers. To my surprise they heat up wonderfully! I simply dumped the cold oats in a bowl, warmed in the microwave for 2 minutes and topped with honey and cinnamon. It was just as good if not better the next day!