This post may come as a surprise to some long time GreenLiteBites readers. I rarely share traditional dessert recipes as my cooking inspiration has always come from making things lighter and staying away from traditional ingredients like butter and white flour.

However, my intention with this recipe wasn’t to make myself a super light dessert. It was to get my 8-year-old excited to be in the kitchen with me again.

As he’s gotten older, I’ve noticed a lack of interest in cooking (despite involving him as a really young age) while seeing an increase in his attraction to Dad’s junk food, like store-bought chocolate cupcakes and donuts.

Well, this month's Food Network magazine had a Kids Mag insert and you should have seen his eyes light up at the Whoopie Pie feature.

That’s when it hit me! I need to let him cook things he’s interested in cooking! So this weekend we spent some time in the kitchen together, just like the old days, except now he does most of the cooking himself!

The Whoopie Pies came out amazing! GIANT (too big, more later on that later) but so good even The Husband ate one!

You have NO idea how huge that is. He NEVER eats anything I bake because it’s always too untraditional for him, but these he loved. The Whoopie Pies even sparked a conversation that we should make our own desserts instead of buying store-bought because they have fewer ingredients and he TOTALLY agreed.

This is a big step toward making my pantry look less like a convenience store and I’m SO on board.

Anyway, my mission was accomplished. Little Guy was again interested, engaged and having fun in the kitchen (not to mention learning.)

Now his brother will have both of us as teachers. 🙂

Here’s how we made them (with original Food Network ingredients in parentheses). You should know by now I canNOT follow a recipe. I just had to put a GreenLiteBites spin on them. You’ll see.

Put the flour, cocoa powder, baking powder, and salt in a bowl and whisk until well combined.

In another bowl, beat the butter, sugar and vanilla until fluffy. Once fluffy, beat in the egg.

On low speed, beat in the flour in 3 batches alternating with the almond milk until just combined.

Spray non-stick cookie sheets with non-stick cooking spray. Scoop 18 mounds of the batter on the sheets about 2 inches apart. This is where we went wrong and made ours about double the size we should have.

It was all good though; we decided to just make giant whoopie pies.

Shape and smooth the mounds of batter with wet fingers.

Refrigerate for a few minutes to set (original said 30 minutes -- we waited 10, tops) and then bake for 10-12 minutes until firm.

Cool for 5 minutes on the sheets and then remove and let cool completely before adding the filling. 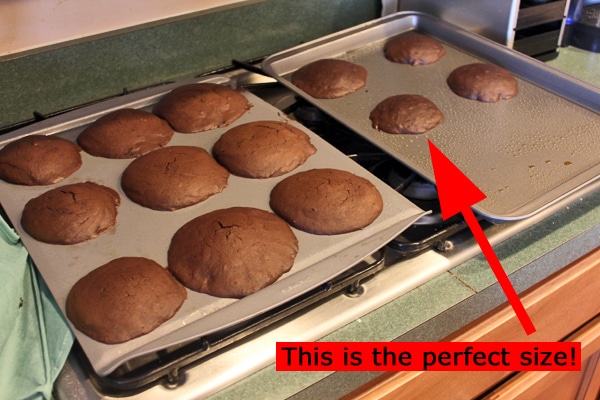 While the cookies are cooling, beat one stick of butter until fluffy then gradually beat in the powdered sugar ¼ cup at a time. Add the milk about halfway through. 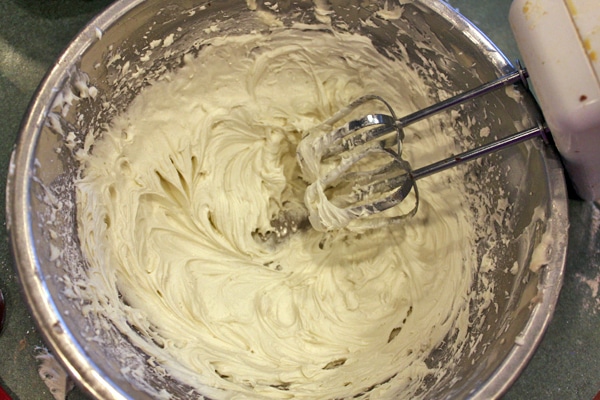 The 8-year-old tried to teach his little brother the art of spoon licking but he was not interested! 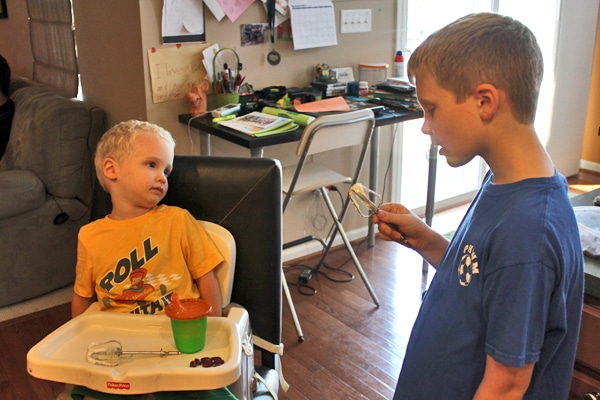 Once the cookie parts are cool, smear on the filling, top, and enjoy! 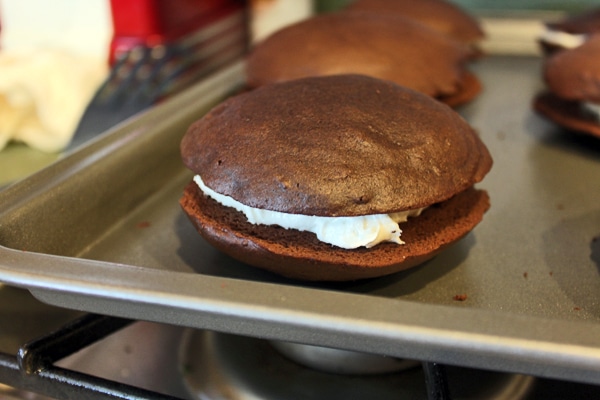 He REALLY liked them. A lot.

And when an 8-year-old can't finish one you know you made them too big! 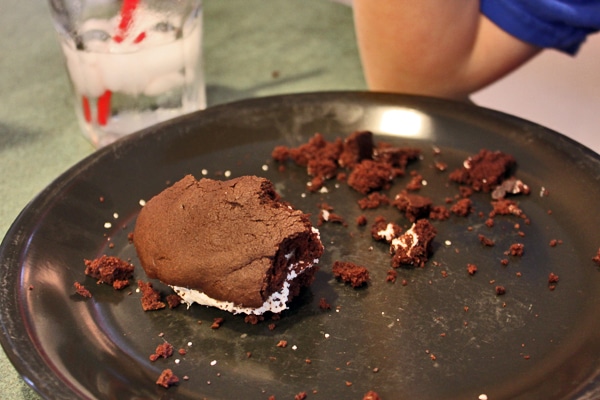 I'm supplying the nutritional information for those interested based on how many whoopies pies you'd get when making them normal size.

I'm not claiming these are "healthier" or "light", I just like to make a few small modification to the ingredients so there's at least SOME value there (whole wheat flour vs bleached, coconut palm sugar vs white sugar, less sugar overall, etc.) Remember my goal was an 8-year-old excited in the kitchen and in that sense my mission was accomplished. He's already asked to make them again.

That being said... HOLY SUGAR! I may try to reduce it even more next time.

« We Already Had to Have 'The Talk'
Green Watermelon Avocado Smoothie »