Sometimes I just get craving and last night was one of those times. After recording a video for Roni's Weigh I took my hand at an idea I've had for some time. Could I use won ton wrappers as crusts for mini apple pies?

Well, I'm happy to say, the answer is YES!

I can't believe it worked! Even the husband liked them! At least he said he did after his one big ole bite. I don't get it. I just don't get it! I almost ate the whole batch in one sitting. How does he do that?!?

Anyway, this is what I did. I'm working from memory hear so bear with me. 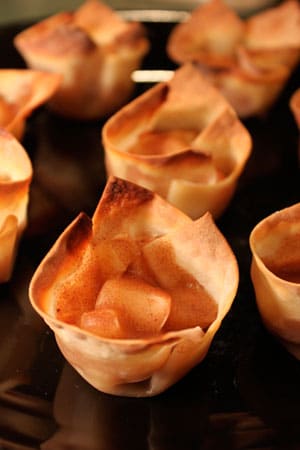 In a small pot whisk the water, honey, cinnamon, vanilla, and flour over medium hear. Add the apple. Stir to coat everything. The liquid should just boil and start to thicken.

Drop the heat down to medium low and cover. Cook for 12-15 minutes until the apple just softens.

Meanwhile, spray a mini muffin pan with non-stick cooking spray press the won ton wrappers in to form the crusts.

Once the apples are done. They should look like this... 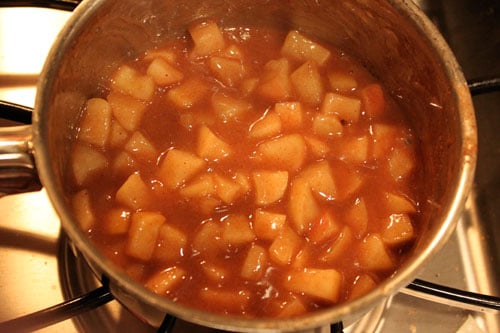 Scoop the apple mixture evenly into the wontons. Bake for about 10 minutes until the edges start to brown and get crispy.

I didn't have any but boy would these be great with a dab of frozen vanilla yogurt or cool whip! Here's a little before and after cooking... 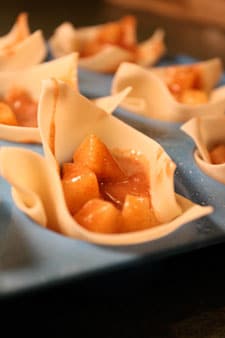 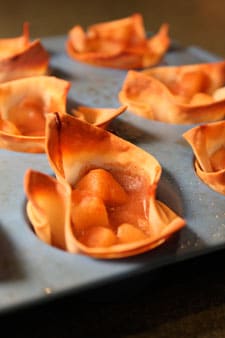